Moonshot 3.0—Inside ConsenSys Space and TruSat 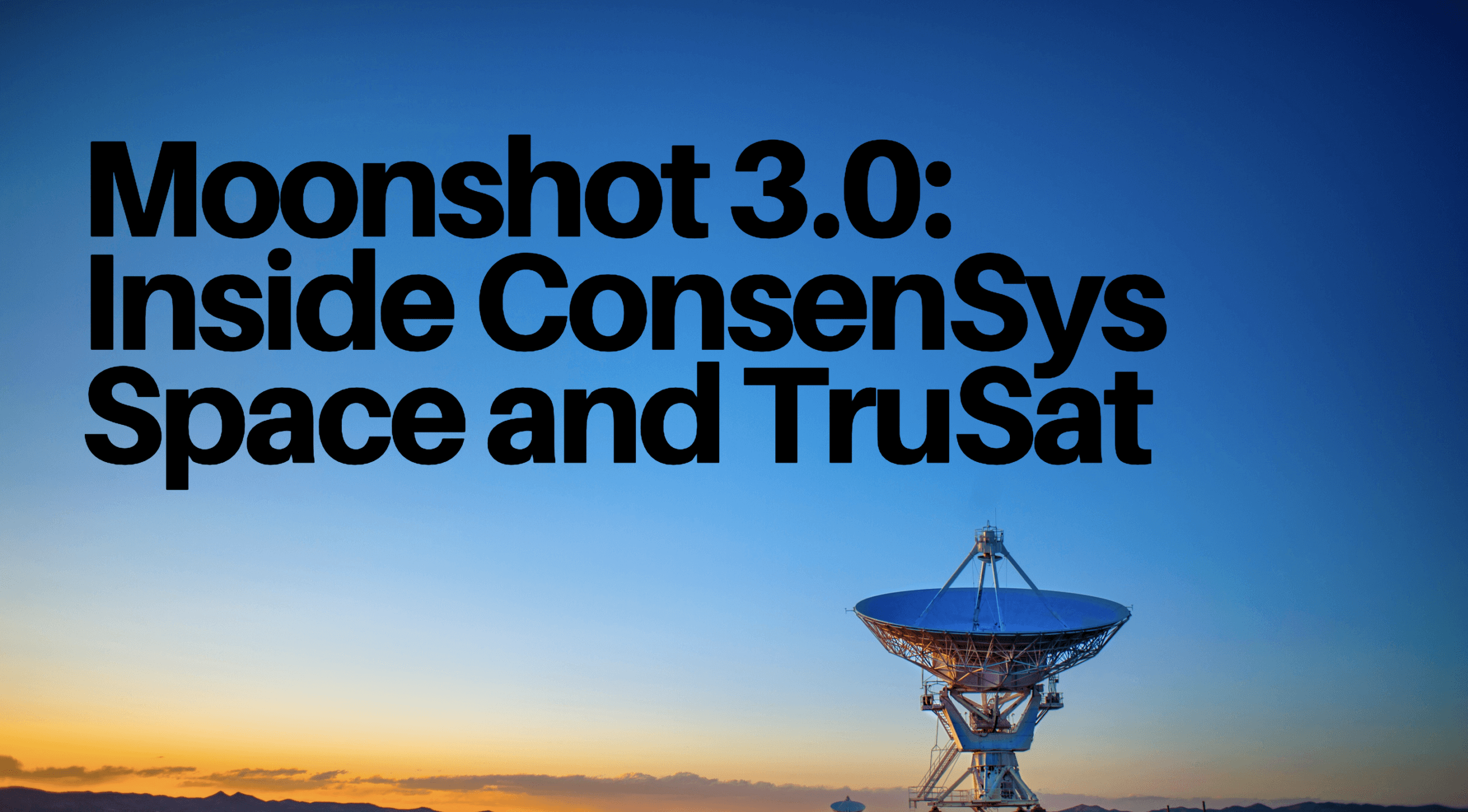 When ConsenSys announced the acquisition of Planetary Resources in 2018—a pioneer in the embryonic, but astronomically ambitious industry of asteroid mining—the move was met by surprise in both the space and blockchain sectors. After all, what do asteroid mining and blockchain have to do with one another?  With the release of TruSat two weeks ago—on the opening day of the International Astronautical Congress no less—ConsenSys Space has begun to answer that question, and initiated a march towards a democratized, diversified, and decentralized future in space.

Amid projections of a ten-to-twenty-five-fold increase in the number of satellites in low Earth orbit, avoiding collisions between satellites is essential to the long-term sustainability of spaceflight. TruSat is an open source, citizen-powered space sustainability system that utilizes crowdsourced data from hobbyists and professionals all over the globe, to create an independent record of satellite orbits freely accessible to anyone, fostering transparency and accountability for adherence to sustainability standards. It is also just the incremental first step in ConsenSys Space’s vision of the space economy.

The levels of blockchain-integration into ConsenSys Space endeavors are multifold, from enabling TruSat’s open, permissionless architecture, and growing to include crowdfunding to fueling a tokenized economy.

“The core innovations of TruSat are best understood relative to existing sources of Space Situational Awareness (SSA) data,” explains Brian Israel, Co-Founder of ConsenSys Space and formerly the lead US State Department lawyer addressing emerging issues of space law at the United Nations. “These innovations are most relevant to independent assessment of the sustainability practices of satellite operators. Existing government sources of SSA provide a limited subset of the data they collect. Being  primarily a national security mission, they don’t provide the underlying data that would allow consumers of SSA information to perform their own analysis. When you have a single entity controlling the whole process from the sensors to the output, your trust in the output is only as strong as your trust in that institution.”

“We have architected TruSat to improve on that for the specific application of independent assessment of performance against sustainability standards. What we’ve done is taken the institution out of the loop. ConsenSys Space won’t be able to control this. It’s permissionless. Anyone can put in data. To have a system that is open, decentralized, autonomous, and trusted is a difficult engineering challenge, but we are leveraging some core attributes of blockchain technology to achieve it,” says Israel.

The path that led to TruSat threads through NASA, the State Department, and learnings earned from the cutting edge of planetary enterprise. “Space is a challenging market. It’s very capital intensive. The development timelines are longer than most things. The ability to incrementally deploy is extremely difficult to achieve. In terms of initial capital, you’re often 99% in before you have the opportunity to deploy. And then, of course, it’s rocket science,” explains Chris Lewicki, Co-Founder of Planetary Resources, ConsenSys Space, and a veteran Flight Director of multiple NASA missions to Mars. “Things are very difficult. They go wrong, and you have to recover from them. That’s the typical startup environment in space. A very fortunate few are able to navigate through that.”

In the long arc of what Ethereum can do for space, ConsenSys Space is looking beyond existing public and private funding models. Brian Israel contextualizes the merging of Ethereum and the great beyond in the history of space economics:

“To put it in a software versioning framework: Planetary Resources was not an incremental play. It was a moonshot in the truest sense, something that is pushing so far beyond what’s been done before that it’s just on this side of impossible. The initial moonshot was a literal moon shot: the Apollo program. The paradigm for funding government flagship space missions, like the three Mars missions for which Chris served as Flight Director, is, roughly: the government collects taxes, they allocate a very small percentage of what they collect to NASA, who contracts with private companies to execute the mission. It’s a brute force approach that requires huge amounts of capital and talent. In return, not only do we get progress in space, when it works, but a lot of derivative benefits as well.”

“Planetary Resources would fall into what we’d call a Moonshot 2.0 paradigm, an attempt at a private, commercial moonshot. You see this among the founders of a lot of companies trying to do new, interesting things in space—not just serve NASA, but go beyond what NASA is doing. You find people who grew up in the Apollo age, but were dissatisfied by the pace of progress. They said: ‘Commercial enterprise can do it better, faster, adopt more risk, innovate faster.’ As Planetary Resources and many other companies found, you’re flying against powerful economic headwinds trying to do that without a government customer. Moreover, the mechanics of funding a privately held corporation mean that 99.9% of the people inspired by the mission can’t participate.”

Therein lays a problem for which blockchain technology presents new opportunities. “With the foundational tools of Ethereum as a mechanism for allowing a globally distributed group of people to put small chunks of  capital into a project and to have confidence that it will be distributed according to their vote, we can start to see the contours of a Moonshot 3.0: bottom-up, global collective action to carry out ambitious space missions,” explains Israel. “That’s not necessarily something we’re going to have tomorrow, but it’s something you can trace from TruSat and arc onto a decentralized and global-citizen led space program.”

The TruSat prototype is primarily intended for testing core orbit calculation functions, and does not include the planned features for easing the process of making and reporting satellite observations. “The people who are most likely to use it at this stage fit the profile of the existing community, hobbyists who track satellites,” explains Israel.  “They’re people who, if they aren’t astronomers, have science and tech day jobs and some facility with technical subject matter. University students have shown a lot of enthusiasm both for being part of the solution to space sustainability challenges and the mode of participation of tracking satellites. A large part of our roadmap for developing TruSat involves making it easier, more enjoyable, and rewarding to spot a satellite and report that observation utilizing ubiquitous consumer hardware like smartphones.”

ConsenSys Space is building the collective action infrastructure for Moonshot 3.0 in parallel with rapid advances with space hardware infrastructure. As ConsenSys Space democratizes space endeavors by creating new opportunities for direct participation, innovative companies across the space economy are democratizing space access by driving down costs and timelines. “We’re going to see more people in space, whether it’s on the moon or suborbital flights or private space stations,” says Lewicki. “We’re going to see a lot more infrastructural tools. There will be a lot more support. It won’t be as capital intensive. That will enable a lot more experimentation and application. Space won’t be some exotic place that’s alien. It will be a place that we naturally extend into and do business in. We used to cross oceans and think that was a generational epic, and now it’s just a normal Tuesday.”

Developing TruSat from the present prototype into a valuable resource for preserving our spacefaring future—and achieving citizen-powered moonshots—will depend on the contributions of a global, decentralized open source community. To catalyze community involvement in building out TruSat, ConenSys Space will host a remote hackathon in January and post bounties on Gitcoin.

You can learn more and get involved by joining the TruSat Community at www.TruSat.org/Join