Trends in Tokenization with the EEA and Chamber of Digital Commerce 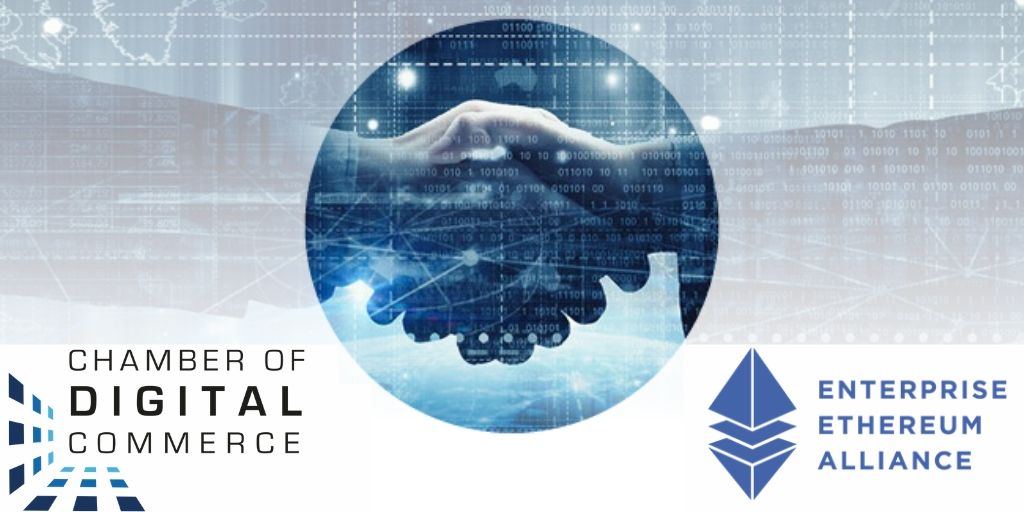 The Chamber of Digital Commerce’s Token Alliance is an initiative with more than 400 global participants, including blockchain and token experts, technologists, economists, former regulators, practitioners and law firms. The Token Alliance is co-chaired by Dr. Jim Newsome, Founding Partner of Delta Strategy Group, and Former Chairman, Commodity Futures Trading Commission, along with Paul Atkins, CEO, Patomak Global Partners, and  Former Commissioner, U.S. Securities and Exchange Commission. The group released “Understanding Digital Tokens,” a series of reports that delves into the overall regulatory and market landscape of the token ecosystem.

The strategic partnership between the two organizations will focus on promoting token interoperability initiatives and regulatory considerations regarding digital assets and blockchain-based technologies.

To further examine the partnership and trends around tokenization, ConsenSys interviewed:

What was your initial reasoning for founding the Chamber of Digital Commerce?

Perianne Boring: “In the early days, we believed that that government and regulation would be a barrier to the adoption of blockchain technology, and we were convinced that the industry should have dedicated and professional resources to work with the policymaking community to guide them as this technology begins to grow and flourish. We launched five and a half years ago and now we have over 220 members — so it turns out we were pretty correct in that assumption.” – Perianne Boring

What is the current landscape of digital asset and blockchain regulation in the U.S?

Perianne Boring: “In the U.S., the SEC views an expansive number of digital assets as falling within the securities laws framework using case law that was not designed for a digital, tokenized environment, thereby impeding innovation for fear of triggering these laws. If a digital asset is designated as a security, it will never be able to operate as a means of payment or be used for its intended use or design in a blockchain network. The CFTC has said that virtual currencies, including bitcoin and ether, are commodities. One side of the Treasury Department, FinCEN, is regulating digital assets like currencies, which means they are subject to AML regulation. The IRS, which also resides within the Treasury Department, has determined that they should be treated and taxed as property. When you have this type of regulatory ambiguity or uncertainty, it makes it very difficult to build and operate in the United States.”

“Stablecoins are not intended to be securities. They’re intended to be used as something that stable in value, whereas a security has an expectation of profit. But if [stablecoins] are now being defined as securities and thrown into securities laws, they will never be able to operate as a means of payment. That’s one example, but as we get into more advanced applications of blockchain technologies and digital tokens, these issues are just going to get more complicated over time.”

What is the importance of this partnership, and how will the Chamber of Digital Commerce and EEA collaborate moving forward?

Paul DiMarzio: “This partnership is a prime example of a tech standards-focused group (EEA) and regulatory- focused group (Chamber of Digital Commerce) focusing on different aspects of the technology that will push the industry forward. The key here is to make sure that within the whole token industry, anybody who is producing software around tokens does it in a way that meets the regulatory requirements and also does it in a way technically that provides interoperability.”

Perianne Boring: “If these two communities between the policy community and the technical communities are not coordinated, you’re going to end up with standards and regulations that are not interoperable. A formal partnership between the EEA and the Chamber of Digital Commerce is incredibly important. Recently, we’ve spent a lot of time working on how to define a stablecoin and that really does become a technical conversation, so a big part of this partnership is integrating the work so that we can have the cross-pollination of minds between the technical community and the regulatory community.”

Perianne Boring: “Two and a half years ago, we put together a working group within the Chamber of Digital Commerce called the Token Alliance, which set out to bring the blockchain industry together to issue a set of resources for policymakers and practitioners (firms in token space) to create guidelines. The TA issued the first and largest regulatory project around tokens this industry has seen with over 400 contributors providing guidelines for tokens that are considered securities and those that are not. It was a massive accomplishment to engage our members in this process.

Earlier this year, we increased the scope of the guidelines that we’ve now issued guidelines for consumer protection, cybersecurity, and AML. The Token Alliance has also developed several other public legal resources, including legal landscapes of different jurisdictions around the world.”

What misconceptions do you feel that people still have about tokenization and blockchain?

Marley Gray: “Broadly, there’s a misconception that tokenization is only about cryptocurrency, or that it’s only used for payments. We have to dispel those misconceptions and show that tokenization builds on business concepts that people already understand. So there’s a huge educational effort we have to undertake with a lot of different audiences and the first objective is to establish these common terms and definitions; otherwise you’re not going to get a consistent message.”

What are some trends in the tokenization that you are seeing either from the technical or regulatory perspective that will play out in 2020?

Marley Gray: “Stablecoins will be a major trend, because it’s and easier concept to understand, although it’s still really hard to define. We’re also looking into behaviors and properties that we use with tokens to make custody easier and more straightforward. Some of the early [adoption] we’re seeing is through the mixing of token behaviors across ecosystems and industries. Broadly, we look at everything as a supply chain and tokenization should be the lubrication of supply chains.”

Perianne Boring: “The Chamber of Digital Commerce is focusing on custody and developing a set of policy considerations for the custody of digital assets. It’s very clear that the regulatory conversations are evolving rapidly as bigger organizations enter the [blockchain] space as well. Many developed nations around the world are also developing strategies to build and develop blockchain technology within their own jurisdictions.”

Paul DiMarzio: “What’s really going to be interesting from an EEA and TTI perspective from my point of view is the final move to certification. It has always been a goal of the EEA to certify that applications adhere to our specs, and that will go live in 2020. Then, we will also be able to verify that a token has adhered to the specs and framework which will help increase interoperability from a technical point of view.”

Where is the U.S. in terms of global leadership for blockchain and digital asset regulation?

Perianne Boring: “If you look around the world, there are multiple countries that have advanced technology strategies and frameworks already in place, such as China, the European Union, Singapore, and many others. These nations are out in front of the United States in terms of creating legal environments that support the development of blockchain technology within their borders and have developed government strategies to utilize blockchains for the benefit of the public sectors. So, I would not consider the U.S. at the forefront today, but I do still think there’s time to catch up and for the U.S to preserve its technical leadership.”