Ethereum Has 4x More Developers Than Any Other Crypto Ecosystem

Read the most important crypto insights from Electric Capital's Developer Report
by ConsenSysAugust 20, 2019
Posted on August 20, 2019 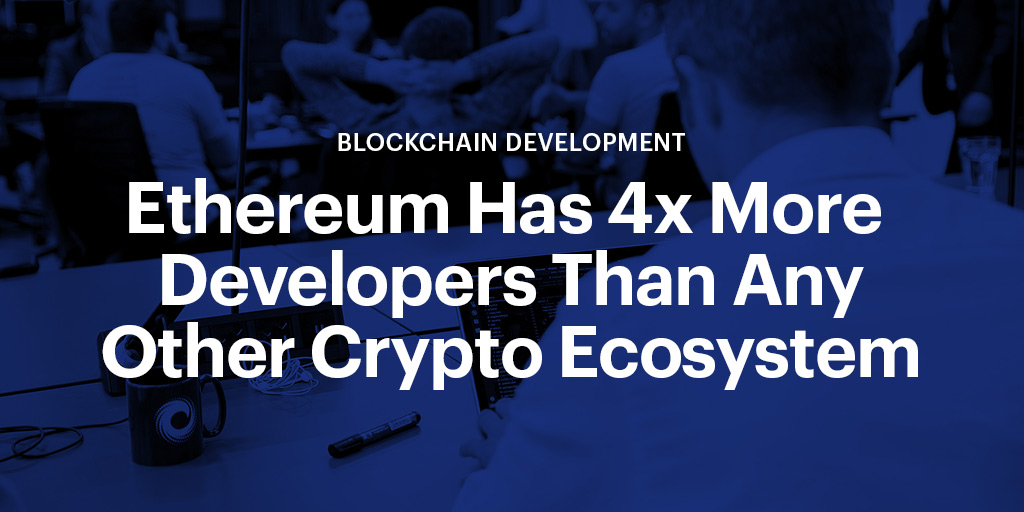 Active Ecosystems: The report also defines active ecosystems as having at least 2 full-time developers committing code for at least 6 months.

Following this methodology, Electric Capital identified 583 active ecosystems out of a field of 1,140 total ecosystems.

1. There was a decrease in total blockchain developers, but an increase in full-time developers.

The number of full-time blockchain developers increases by 13% while the total devs overall fell by 10% compared to the previous year. Here’s where it gets interesting. The amount of committed code volume stayed consistent even through the 10% drop in devs. Full-time developers commit the most code and so the consistent volume combined with the overall increase in full-time developers is a great sign for the crypto ecosystem.

2. Bad projects are on the decline.

The top 100 crypto projects by market cap contain 50% of all developers and only lost 4% of their developers since last year. Meanwhile, projects outside the top 100 lost 19% of developers! Just like all emerging technologies, the weak projects and companies will be weeded out while the great products prevail.

3. The Bitcoin ecosystem has continuously grown in terms of developers since 2014.

Bitcoin’s developer count has tripled since 2014 and remained relatively the same even throughout the 2019 crypto winter. This speaks to Bitcoin’s resilience and that many people are still actively working on making Bitcoin better.

The report identifies that 18% of all open-source crypto developers work in the Ethereum ecosystem. Even more, Ethereum has 4x more devs than the next ecosystem, which is Bitcoin.

5. Grin has an impressive developer count for a young project.

Grin is a relatively new project that has garnered 33 developers working on the cryptocurrencies protocol. This type of growth speaks to the community behind the cryptocurrency and infers that they are still actively working on new iterations and implementations for Grin.

Maker notably increased its total developers by 80.68% or 27.8 in raw numbers. While the large percentage growth is slightly due to the fact that they had a lower developer count, it’s still very impressive. Basic Attention Token also increased its total developer count, which speaks well for the company aiming to revolutionize the browser industry. Bitcoin Cash lost the most developers in percentage terms, but EOS lost the most developers (30.5) overall.

Ethereum remained relatively consistent in terms of total developers but increased its number of full-time devs by 34%. Ethereum, EOS, and Bitcoin also have an increase in part-time developers committing code. Additionally, one could make the argument that Ethereum also gains developers prominent ERC20 tokens gain more developers. It would also be feasible to assume that some Ethereum developers jump onto new Ethereum based projects just as many original Bitcoin developers transitioned to cryptocurrencies such as Monero, Grin, Bitcoin Cash and more.

8. “Active Ecosystems” were defined into 5 groups.

Smart contracts account for 40% of all developers with applications taking the second most. However, both of these groups have lost developers over the past year. Meanwhile, Defi and infrastructure developers have both increased significantly.

9. The crypto ecosystem is growing rapidly and there’s still plenty of room for expansion.