Congrats to Status, Storj, 0x, Metamask, MakerDAO, Gnosis, Augur, and Origin Protocol for all the hard work!
by ConsenSysAugust 7, 2019
Posted on August 7, 2019 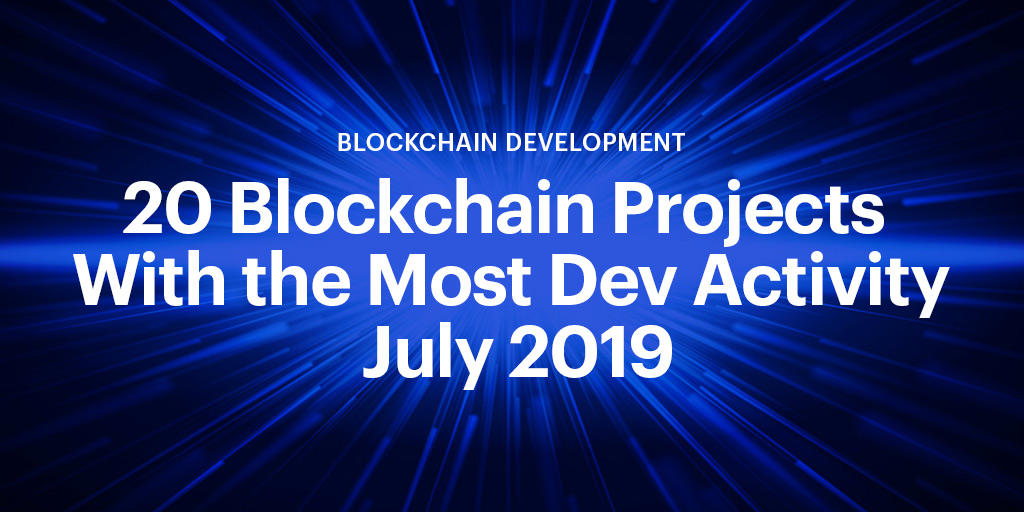 You can tell a whole lot about the state of a project or application by the amount of activity it has on GitHub. Projects with lots of action are more likely to be in the midst of BUIDLing and shipping, while a Github that’s populated only by lonesome tumbleweeds is a sign of a project that’s either not moving forward or is so perfect that it doesn’t require any more work — and that is something of a rarity.

State of the Dapps does a great job of harvesting data from Github, including commits, pushes, issues, and pull requests from open source projects representing the most notable platforms that support decentralized apps — including Ethereum, EOS, Steem, and xDai. The result is a bird’s eye view of developer activity in the blockchain space.

Although this information is by no means a definitive picture of the blockchain ecosystem for countless reasons, the Github data illustrates some interesting trends regarding developer activity in the blockchain space in regards to open source projects. Don’t see your favorite project listed below? Encourage them to make their activity public and published on State of the Dapps (We’re looking at you, Cardano fans!)

The month of July showed significant changes in rankings for activity on Github, with projects like Neufund slipping out of the Top 20 after a good showing in the previous month of June and upwards moves from the likes of eSteem and Polymath. July also saw big moves from perennial developmental leaders like Status and Storj. However, Ethereum still dominates the charts from top to bottom, with projects representing EOS, Steem, and Tendermint also maintaining a strong presence.

Below are the top 20 projects on State of the Dapps by developer activity over the past 30 days as of August 6, 2019.

Mobile Ethereum OS Status has long been a leader in the blockchain space, and recent activity on Github — with 6666 events in the past 30 days — indicates that the sizable Status team continues to outperform challengers while developing the iOS, Android, and desktop version of the Status app.

Decentralized cloud storage network Storj is working fast after the launch of the final phase of its alpha — named Beacon—towards Pioneer, the Storj platform beta. The Storj team maintained second position this month with 5633 commits, an impressive figure as usual from one of the most productive teams in all of blockchain.

Big moves from Aragon this month as the the project jumps nine spots to #3. The Ethereum mainstay has long since stood out for being a well-run operation, and its platform for creating decentralized organizations presents a powerful proposition. Now live on Mainnet, the Aragon team committed 3779 events to Github over the past 30 days, up approximately 73% from the month prior.

After launching a Mainnet iteration, the Tendermint-based blockchain interoperability platform Cosmos holds steady on its impressive recent performance with 3492 commits over the past 30 days, a 22% decrease from the month prior. Cosmos’ iteration of its Cosmos Hub is well underway with the launch of Lunie, its native crypto wallet application.

0x notes a big jump in its developmental pace this month with 3268 commits, a 77% increase from last month. With over 30 projects utilizing the 0x infrastructure for creating all kinds of decentralized marketplaces to the tune of 700k+ total transactions, it may be time for one of the most talented teams in blockchain to make some big moves.

Ethereum-based prediction platform Gnosis has done so much for the blockchain community already in launching its DutchX smart contracts, the Gnosis Safe, and the Gnosis Olympia Alpha — thus creating the tools with which others can launch their own marketplaces. The Gnosis team kept it steady this month with 3211 events on Github, down slightly from the month prior, but still enough for a solid 5th place.

A blockchain platform for the internet of things, IoTex rockets up onto the Top 20 for the first time with development on its IoTex Voting Portal to the tune of 3199 Github events in June, a figure almost identical to last month’s ranking.

Origin Protocol utilizes Ethereum and IPFS to create decentralized marketplaces. The Origin Beta and newfangled mobile app are already live on the Ethereum Mainnet, and you can use it to purchase all sorts of rare, exciting, and sometimes bizarre items like a violin from the 1800s, Ethereum hologram art, and luxury vacation rentals all over the world. With 2966 — a notable jump from last month’s performance — events in the Origin Protocol Github last month, there’s definitely more coming from the Origin team.

High Fidelity, the virtual reality platform launched by the founders of seminal virtual world Second Life already hosts virtual events, and is now working feverishly towards EOS integration. The High Fidelity Github housed 2855 events last month, which is down further from its big jump earlier in the year, and drops three places as a result.

If you didn’t lay down a crypto wager on the United States winning the Women’s World Cup, do you even blockchain? Augur’s platform of a decentralized oracle and prediction market protocol is one of the most remarkable projects live on the Ethereum Mainnet right now, and with a big 2280 events on the Augur Github last month — holding steady — all signs point to continued development. The Augur Blog also provides weekly updates on development for a more granular breakdown.

Everyone’s favorite blockchain browser extension is a cornerstone of the Ethereum ecosystem, and fittingly is always near the top of this list. Now boasting millions of downloads, MetaMask’s lithe team is always hard at work improving the MetaMask product and launching a mobile edition of its product, and registered 2600 events on GitHub last month—a major 42% increase from last month.

Cryptocurrency data dashboard Santiment follows up its return to the Top 20 last month with another major push. With over 1200 assets tracked over 50 metrics, Santiment developer activity is up a further 42% month-over-month as the SANbase platform goes live.

A secure multi-coin wallet for Android and OS devices utilized by many leading organizations around the crypto-sphere, Trust Wallet is also the partner wallet for cryptocurrency exchange Binance. Not even in the top 20 earlier this year, Trust Wallet rocketed up the dev activity charts and has shown few signs of slowing down since then with 2169 commits in July.

Thailand-based OmiseGO has been focusing on scaling and interoperability on the Ethereum Network since its launch. With MVPs and testnets of scaling solution Plasma already produced, OmiseGO’s far reaching and substantial developer work resulted in 2130 events on Github last month.

MakerDAO’s three-pronged approach to decentralized finance includes the Dai stablecoin, collateralized loans via the Maker CDP mechanism, and community governance. Not just one of the most used platforms in Ethereum, in May, MakerDAO’s team was busy at work under the hood, adding 2052 commits to Github over the course of the month.

POA Network’s BlockScout is an open-source block explorer tool for the Ethereum ecosystem that lets users search and explore transactions, addresses, and balances on the Ethereum and POA Networks. A new edition to the list, the Blockscout team notched up 1838 events on Github in the month of July.

Decentralized blogging and communications platform eSteem, the landmark project on the Steem blockchain, makes it back into the Top 20 after many months. With 1821 events in July, a massive 106% increase from the month prior, we’d recommend downloading the platform and earning for your blogging. If they keep up development at this rate, perhaps this list will be published on eSteem in the future!

A perennial contributor to the Ethereum ecosystem, Decentraland — a virtual reality world built on open standards — has built a robust platform and an entire universe where participants can create and monetize virtual experiences. Returning to the Top 20 this month after a hiatus, the Decentraland team notched up 1706 events on Github this month.

Security Token platform Polymath enables projects to launch STO offerings and has long since led the nascent market segment in this regard. With the launch of the project’s Polymesh initiative, there’s been a lot of developmental activity going on under the hood. Last month saw 1604 events on the Polymath Github, a major 98% increase from June.

Golem’s worldwide supercomputer has been an ever-present in the Ethereum ecosystem, and a leader in both tech and design. With its Beta currently live for download, users can contribute or gain computing power for heavy duty rendering projects. With 1595 commits over the past month, the Golem Network continues its remarkable project with strong upward trajectory.

Check out the all the excellent blockchain projects making progress at State of the Dapps.

Want to start building on Ethereum?

Check out the Ethereum Developer Portal →