Labs Spotlight: The Journey From Hackathon to Breakout DeFi Startup 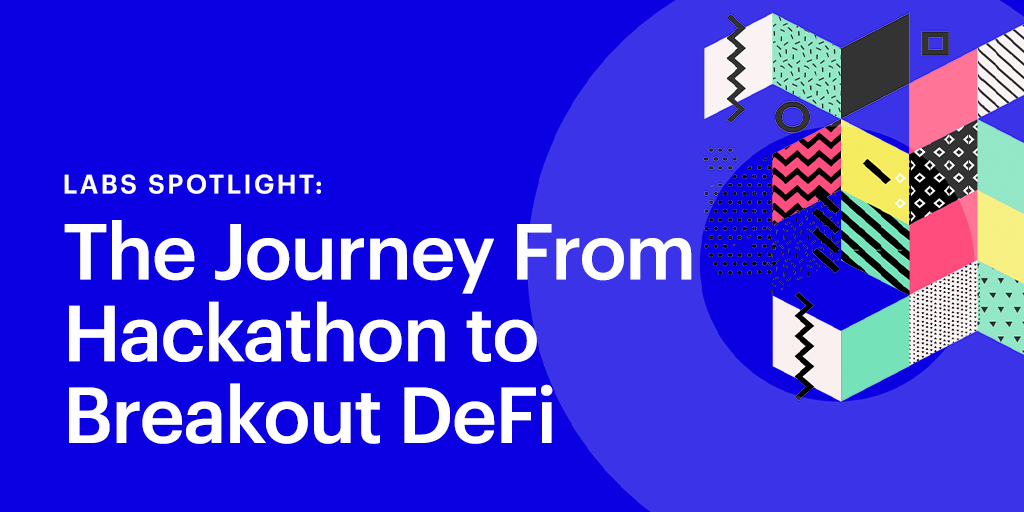 Some people argue that the pillars of the modern financial system are now breaking. Others say that they have been broken for quite some time. Regardless, most financial professionals agree that negative interest rates and inverted yield curves are, for lack of a better term, concerning.

Historically low-interest rates over the past 11 years have had severe consequences for consumers. According to the FDIC, the U.S average interest rate on savings accounts currently stands at 0.09% APY.

The modern financial and banking systems are often referred to as “walled gardens” or closed ecosystems controlled by centralized operators. Historically, the vision of cryptoassets and cryptonetworks has been breaking down walled gardens by creating open-source protocols and peer to peer networks. Bitcoin aims to break the walled garden of sovereign assets. Ethereum more broadly seeks to open the existing financial system by enabling anyone to borrow, lend, save, or exchange capital.

Today this has manifested with people building open protocols on Ethereum, including Compound, Fulcrum, Dharma, DyDx, and more. Compound and Fulcrum enable individuals to lend or borrow money from a pool of individuals. Currently, each protocol offers widely varying interest rates from 5-9% variable rates, yielding rates that are 10x in some cases what traditional institutions are able to provide.

While Ethereum has removed the walled gardens of the existing financial industry, these open protocols have created a wild west of finance.

This has led investors to chase interest rates, taking their dai and moving it back and forth between protocols. If you’re like many passive investors, you just put it in one (Compound or Fulcrum) and call it a day, noting that the extra time (and subsequent gas fees) isn’t worth the effort to rebalance your portfolio. Managing these defi interest rates and pooled portfolios could eventually become a full-time job for one individual. Thankfully, one team created a unique solution to this problem.

Enter Team Idle: Bridging the Gap Between Finance and Crypto

Bill Gates and Paul Allen. Bryce Maddock and Jaspar Weir (TaskUs). Ben and Jerry (yes the ice cream). Some of the best projects, and eventual companies are created by high school buddies that later came together to build something incredible.

Similarly, Idle’s story begins with high school friends Matteo Pandolfi and William Bergamo who had complimentary finance expertise and programming skills, respectively. The two friends were interested in crypto and began building algorithmic trading and arbitrage bots on crypto exchanges in their spare time. As the DeFi ecosystem started to expand Matt and William started exploring ways to weave these different open finance protocols together in a single smart contract. Armed with an idea, Matteo and William decided to enter the Open Finance track in the Relay Hackathon to build a solution for lending protocols, and so, team Idle was born.

ConsenSys Labs Relays brings together top talent from around the world for a 15-day hackathon so that hackers and entrepreneurs can form teams to work on compelling real-world problems. Each team is provided the resources and capital that they need to be successful. Top teams have the opportunity to receive further funding to continue their project development.

Through the team formation process, Idle found their last two remaining team members. The third team member is Samuele Cester, another friend and skilled full-stack developer who joined the team during their first hackathon and still works on the team today. Lastly, Luca Guglielmi joined the team as the designer for the Relays hackathon and developed the initial UX of the Idle smart contract.

Team Idle decided to create a smart contract that would automatically rebalance a pool of money that was being lent on an Ethereum lending protocol. Every user interaction triggers a check of different tracked interest rates. Additionally, if an individual notices that Compound’s lending rate is better than Fulcrum’s current rate, they are also able to click a button to rebalance the pooled funds into the platform with the best rate. Therefore the individual is incentivized to rebalance the portfolio of funds for their personal gain while everyone else in the pool also receives the benefit. In this instance, Idle’s smart contract design is a living example of Adam Smith’s “invisible hand” because any individual that self-servingly rebalances the pool of funds also benefits the other members in the pool. In the end, everyone receives the best interest rate.

Throughout the design process, Idle opted to remove centralized points of failure which is why the fund pool rebalancing doesn’t occur automatically and instead requires an individual to trigger the rebalancing process. The team has written extensively about decentralized rebalancing and the logic behind their decisions.

The team placed second in the Gitcoin Beyond Blockchain Relay hackathon and part of the team’s success was due to its utilization of open source technologies. The team built a full client dapp using Truffle, React, Rimble, and contracts developed in Solidity. Moreover, by building synergistically with platforms like Compound and Fulcrum, the team ensured they were creating products where demand existed.

After the hackathon, the team qualified for a Personal Best Relay, run by ConsenSys Labs. These are operated as private hackathons, where teams like Idle competed against their previous benchmarks to unlock additional funding. The team was able to ship an improved UX and smart contract, incorporate user feedback and surveys, and draft a strategy for going to market and dealing with regulatory barriers.

Where is Idle Now?

After the hackathon Idle have a series of goals in mind including:

Most recently, Idle has tripled its amount of users with over 178 unique addresses and beta subscribers. Additionally, the team achieved its v1 smart contract cap of $30,000 dollars. This limit was put in place to limit the interest rate slippage problem. The slippage issue occurs when the Idle smart contract holds so much capital that the rebalancing of funds significantly influences interest rates on lending protocols. The team plans to implement a preventive check and dynamic rebalancing in order to get rid of this issue. A dynamic rebalancing means that the smart contract would be able to allocate capital to multiple protocols to ensure the best-combined interest rate.

The other edge case, failed token redemption happens when the liquidity in a lending protocol isn’t enough for all the tokens to be redeemed. In this case, users must be entitled to redeem the remaining funds directly on the Fulcrum contract.

Idle is also looking to collaborate with the existing defi ecosystem by integrating into other products, wallets, lending protocols, and more! You can also schedule a 15-minutes call to chat with them about Idle.

Idle has also applied to Tachyon III, ConsenSys Labs’ accelerator for Web 3.0 companies. Tachyon is an intensive 12-week accelerator that brings together founders to build decentralized financial networks and programmable, composable assets and services that will fundamentally reshape the global financial economy.

As the crypto markets seek to serve tens of millions and eventually billions of individuals, returns need to become more optimized. To achieve massive adoption users, financial professionals, and enterprises will require the ability to maximize their returns from these lending protocols. Today this has been fairly challenging as it requires using a wallet to withdraw the funds, visit another protocol, and deposit your funds. This is akin to having to manually readjust your portfolio every time there’s a significant price increase. It’s tedious and time-consuming. However, Idle presents a decentralized way to ensure your capital provides the greatest return possible.

Teams like Idle represent a new wave of opportunity in Open Finance, in building an optimized, automatic secondary layer on top of finance. The future is making programmable money, smarter, for the average user. They’ve designed a simple onboarding experience that’s straight-forward enough for most crypto-users, and they are iterating towards an improved, revamped UX that simple enough for even the crypto-curious.

“In an ideal world, blockchain complexity abstracted away from users, and they don’t need to understand technicalities to use blockchain products.” – Matteo

The Idle team is incredibly committed to achieving the highest yield possible by utilizing open source technologies. Other hackathon teams and early-stage startups can learn from Idle’s success by looking for ways to use open source tech stacks to build on the defi ecosystem. There are so many opportunities available for hackers and entrepreneurs who are able to create products or services that meet the needs of consumers.

Ready to Build Your Open Finance Company? Get involved!

Register to be notified about Relays and Personal Best launches by ConsenSys Labs, as well as receive exclusive resources, frameworks, interviews with industry and technology leaders delivered directly to your inbox. Follow ConsenSys Labs on Twitter to stay up-to-date about Relays, Tachyon, and everything else

If you want to follow Idle’s updates, you can subscribe to their newsletter. You can also schedule a 15-minute call to chat with them about Idle.

If you have any questions, please join and ask on Idle’s social channels:

Special thanks to Zach Herring for feedback and help with this piece.