Monica shares her journey from CEO of Strate, a leading Central Securities Depository, to joining ConsenSys to champion the adoption of blockchain technology in Africa.
by Lesa MonéJanuary 7, 2020
Posted on January 7, 2020 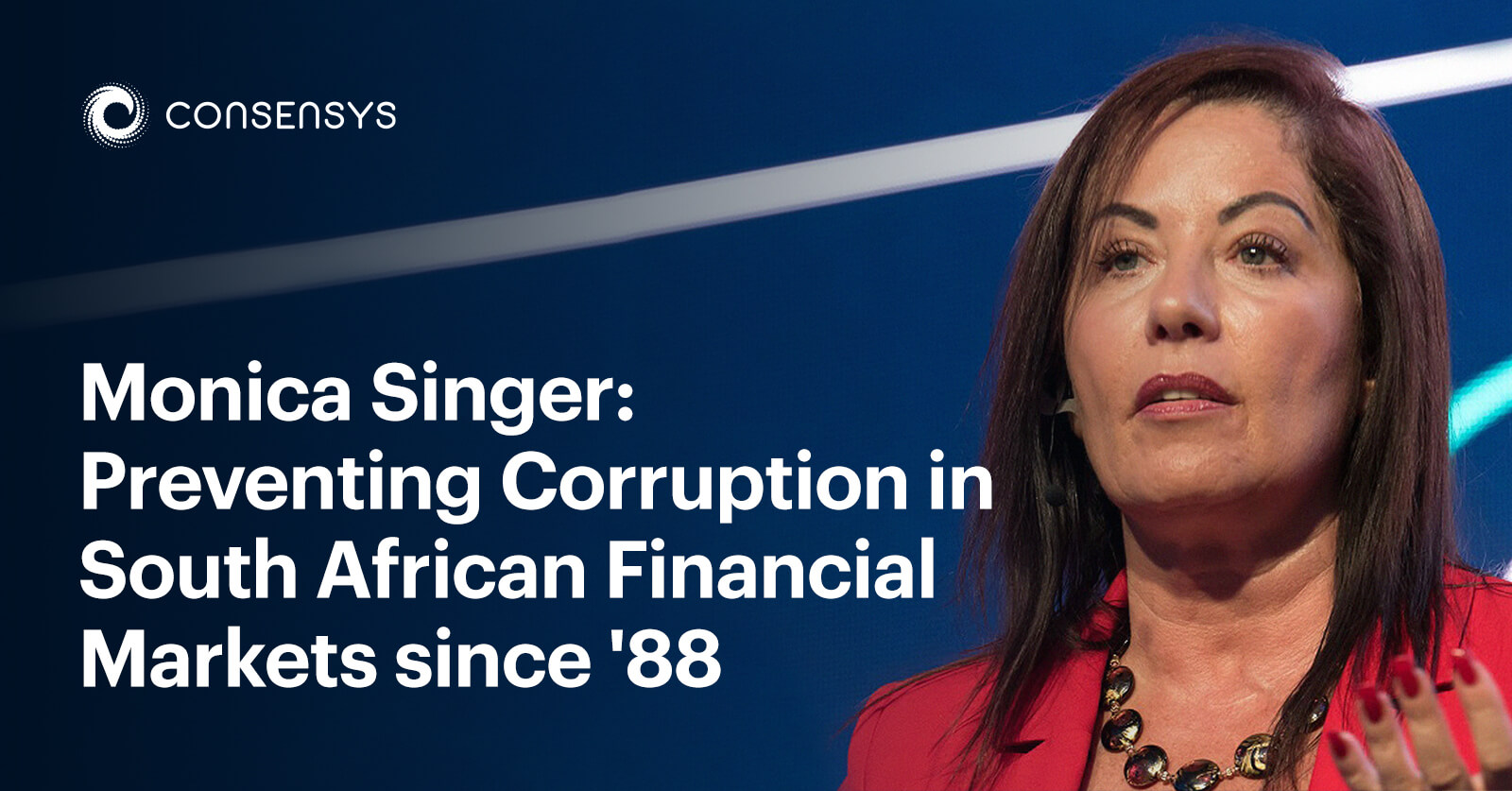 Under her direction, Strate passed a record number of directives and legislation to modernise processes, bring transparency, efficiency, and stamp out corruption. As a result, the World Economic Forum recognized South Africa as the top three most progressive Central Securities Depositories in 2012. South Africa was also ranked #1 for the regulation of securities exchanges.

There was only one thing for Monica to do.

Monica left her cushy position at the top of the food chain, and joined ConsenSys’ flat hierarchy to champion the adoption of blockchain technology in Africa.

This is her story.

The journey to stamp out corruption in financial markets takes Monica from Uruguay to South Africa to Washington DC.

I left Uruguay at age 21 to follow love to South Africa. Upon arrival, I noticed the disparity between white and black because of the horrific Apartheid laws; corruption and inequality had damaged this society. I arrived in South Africa with nothing, and I had to make the best of it under very difficult conditions. I worked hard as an auditor and studied at night to become a Chartered Accountant.

After finishing the compulsory practical work experience as an auditor, I took a job as the Technical Director of the Institute of Chartered Accountants. This position gave me the chance to research audit and accounting standards for the profession. It was very rewarding. We passed new legislation and standards and put together governance to prevent corruption in financial markets.

That’s when the World Bank asked me to be a consultant. I packed up my family and flew them to Washington, DC. Part of my mandate was to investigate what happened at the Bank when the money was given to social impact projects around the world. I quickly found out that less than 40% of funds allocated for social impact projects actually went to the right place. I found out that many governments were corrupt, and there were no controls in place to ensure the disbursements were monitored and kept safe.

I immediately became obsessed with figuring out how we could prevent the money from being misappropriated.

In attempts to bring transparency to loans granted by the World Bank, we developed a financial accountability checklist for the aid-recipient countries. The receiving country would have to complete all financial accountability assessments before disbursements could take place. This process proved to the World Bank that the receiving country would have the necessary controls in place to direct the funds to their intended destinations. Now, I realise that blockchain technology would be the ideal manner that these disbursements could be monitored in real-time.

I moved back to South Africa to change the financial markets. I joined Strate as a project manager and two years later I became CEO. We were totally paper-based in 1996. There were paper share certificates settled with cheques for all transactions in the Johannesburg Stock Exchange. The process was rife with settlement delays, fraud, and lost opportunities for higher liquidity. The stock market nearly came to a halt, as investors lost trust in the system.

When Satoshi made me cry

In 2015, I attended a conference, and I heard whisperings about Bitcoin and blockchain. Curious, I downloaded the Bitcoin white paper, and it changed my life. I cried. This was the formula that I had been searching for my entire life!

Even with our success, I had the constant feeling that no matter what we did in terms of auditor controls and international standards for risk management, they still fail to detect fraud. There are banks that still go under and the depositors lose all of their money. There are insurance companies that go under, and take lifelong contributions with them. What have we been doing wrong? What could we do better?

Then, Satoshi said: instead of centralising records and placing all responsibility on a central authority and auditors to ensure accuracy and fair presentation of the information, decentralise the records in an immutable ledger where, in real-time, all the actors will have their own information under their own control. Blockchain made it literally impossible to cheat.

The company I ran centralized all of the records. We had layers upon layers of intermediaries. It was the only viable iteration from paper-based transactions to digitalisation. But now, I found a new way—a new tool to add to my arsenal. My whole world changed after the Satoshi whitepaper. I had to find a way to bring blockchain to South Africa’s financial markets.

My board was happy with the progress that we made at Strate, and didn’t see blockchain as the necessary next step. They thought I had lost my marbles. Being true to myself, the only option I had was to resign and evangelise blockchain technology myself.  I ran Strate for 19 years.

I notice generational gaps in blockchain acceptance. I realise that it is very hard for my generation to accept blockchain technology. We were absolutely brainwashed into thinking that the only way to protect this world was to have central banks, central authorities, and other hidden structures. We never thought about empowering the depositors or investors. They had to depend on us, and we would take care of them. I understand that it is a difficult change to conceptualise. I think of it as similar to the paradigm shift when people were told that that the world was actually not flat, but round.

I remember sending the first fax. Then we moved to email. For our age, the baby boomers, this technology is too hard to wrap your head around. For the younger generation, it’s a no-brainer.

“No problem can be solved from the same level of consciousness that created it.”

Think about when Vitalik created the smart contract. He was 19. He said guys, no brainer, let’s take the Bitcoin and improve it. Younger people are the key to implementing this technology. Only someone who is not part of this reality could have defined such an incredible idea. That’s why I love working with millennials. They have an incredible ability to think totally freely without regard to this reality. I hope to live long enough to see the younger generations implement this technology.

“Monica, are you smoking something?”

A lot of executives think, “Transparency by design is just not possible,” or “I’ll retire before its implemented,” which is an incredibly selfish approach. You’re going to retire, not implement it, and leave your team without even the benefit of the education of this technology?

So, the most important thing to do right now is to empower the next generation by teaching them how to code. I’m working closely with Eseoghene Mentie in Lagos, inspiring kids to learn to code and work remotely.

Also, I would say that our language in Web3 is way too techy. We have way too many technical words. Speak normally! Use the language of the people you’re talking to. When I give my presentations, I use the language of financial markets. I present journal entries to show the errors in the current system versus the opportunities with blockchain technology. When people see it, they can start seeing what is possible. Because they get it. I don’t use any techie language. I don’t tell them about the blocks, hashes, types of cryptography, interoperability, nothing. Keep it simple and they will understand.

African Central Banks should create their own coins, before Libra ruins the world.

Right now, I’m evangelising the idea of Central Banks to issue their own digital currency in Africa. I believe that all Central Banks should take action so as not to lose their right to set monetary policy if/when people stop using their issued fiat currency. Moving to digital currency could prevent them from losing control to Libra or other stablecoins that are being launched.

I love the Bounties Network program, especially the work that they are doing with Bounty for Basura. But what if we had proactive bounties instead of reactionary bounties? What if we incentivized nature preservation? The people that are currently burning the forests in the Amazon and Indonesia receive money from burning trees to farm soya or palm oil. People are hungry. They need money. I understand the motivation.

But, If I could give a bounty to every single inhabitant of the Amazon, and say, “keep the trees, and you will earn more money than if you cut them down and plant products,” I would. The trees are more valuable than what they are planting, but the inhabitants don’t directly profit from this value. We could create a bounty system that gives people more money to sustain their surroundings/habitat, instead of destroying it. We could incentivize forest preservation. Bounties to not destroy, instead of bounties to clean up.

At the moment, I am concerned that most of the development will skip Africa. This would be a huge missed opportunity, when, in fact, Africa has the largest concentration of young people in the world. If given access to wifi and a computer, they could be trained to be part of the 1 million developers we’re searching for Ethereum. Where they live is no longer a factor. For this reason, we are organising ETH Lagos with the help of the Ethereum Foundation in 2020.

My first job was at the South African Institute of Chartered Accountants from 1988 to 1995.  Now, 31 years later, I was voted by the members of the Institute to sit on its board. I have been trusted to apply the highest principles of corporate governance.

To quote T.S. Eliot, “We shall not cease from exploration. And the end of all our exploring will be to arrive where we started and know the place for the first time.”

Reach out to Monica Singer on LinkedIn and Twitter.

Want to learn more about the role of CSDs and Ethereum in Decentralized Finance?