LinkedIn: Blockchain is the #1 Most in Demand Skill Right Now

The world’s most exciting companies are hiring now! Get the tools you need to join the decentralized revolution.
by ConsenSysJanuary 17, 2020
Posted on January 17, 2020 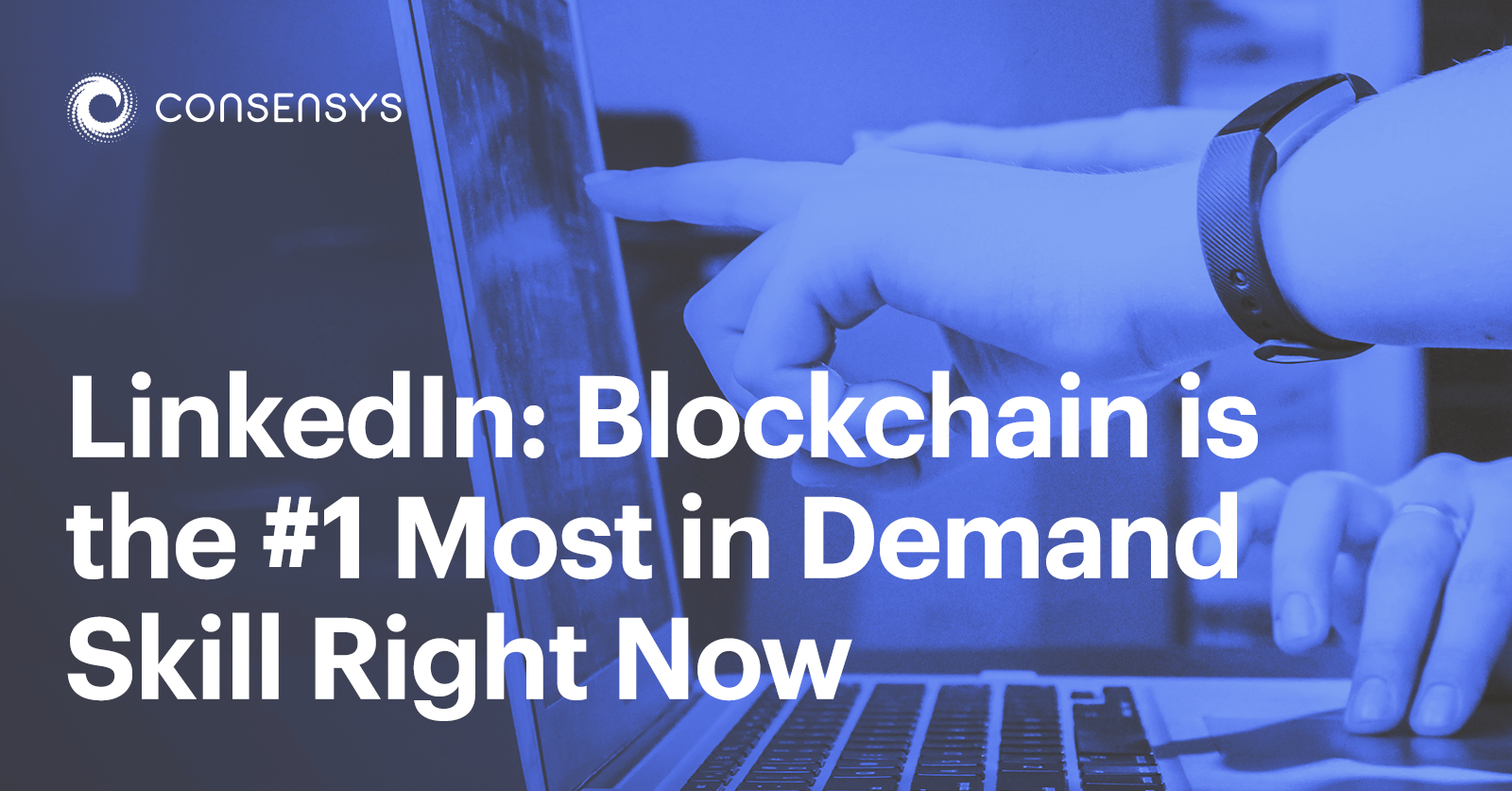 Business and employment powerhouse LinkedIn just released its findings of the most sought after skills by employers, and ‘blockchain’ topped the rankings—beating out cloud computing and artificial intelligence in the process. It’s just another sign of the remarkable growth of the blockchain industry and the development of decentralized tech into a pillar of the global economy.

“Companies see blockchain as a transformational technology,” explains the LinkedIn report. “Blockchain has become a line of business for a who’s who of the corporate world — IBM, Oracle, JPMorgan Chase, Microsoft, Amazon, and American Express, to name just a few. Blockchain is now being used in industries ranging from shipping to healthcare, from farming and food safety to entertainment and gaming.”

While the breadth of market segments being affected by the blockchain boom is remarkably broad, the demand for blockchain as an expertise ranges in positions from technologists to business and creative roles. However, the demand and opportunities for developers with Web3-ready coding skills in languages like Solidity, token economics, database architecture, and other blockchain-specific specializations stand out. And it’s not just the world’s biggest companies getting involved. The blockchain startup world is teeming with ambitious projects building on blockchain networks like Ethereum.

Advertised starting blockchain developer salaries — using aggregated data from CNBC, Janco Associates, and Burning Glass — range from $125,000 — $175,000, and numerous studies have indicated that blockchain jobs are more likely to be remote. That said, the LinkedIn report singles out the United States, the United Kingdom, France, Germany, and Australia as international blockchain hubs.

As elucidated in our Blockchain Jobs Report and corroborated by LinkedIn’s findings, it’s an ideal time to get involved with blockchain technology as a career. If you’re a web developer or technologist looking to learn more about blockchain, the Blockchain Developer Job Kit is an excellent place to begin your journey. ConsenSys Academy also has a Blockchain Developer Bootcamp to get you up to speed on the latest skills required to bring the decentralized future into reality.

Another great way to get started on your journey in blockchain is to read the excellent ‘How I Got a Job in Blockchain,’ which offers insights and pathways into blockchain technology from myriad perspectives.

And the most exciting part about these developments is that the blockchain industry is just getting started. Whether you’re developing infrastructure for a Fortune 500 company or making educational media for a decentralized startup, the future for this technology is very bright—and there’s still time to get involved!