How Ethereum Performed During the Global Market Shocks of COVID-19

A special edition of Ethereum by the Numbers with 6 takeaways from last month’s historic spikes in economic volatility.
by ConsenSysApril 6, 2020
Posted on April 6, 2020 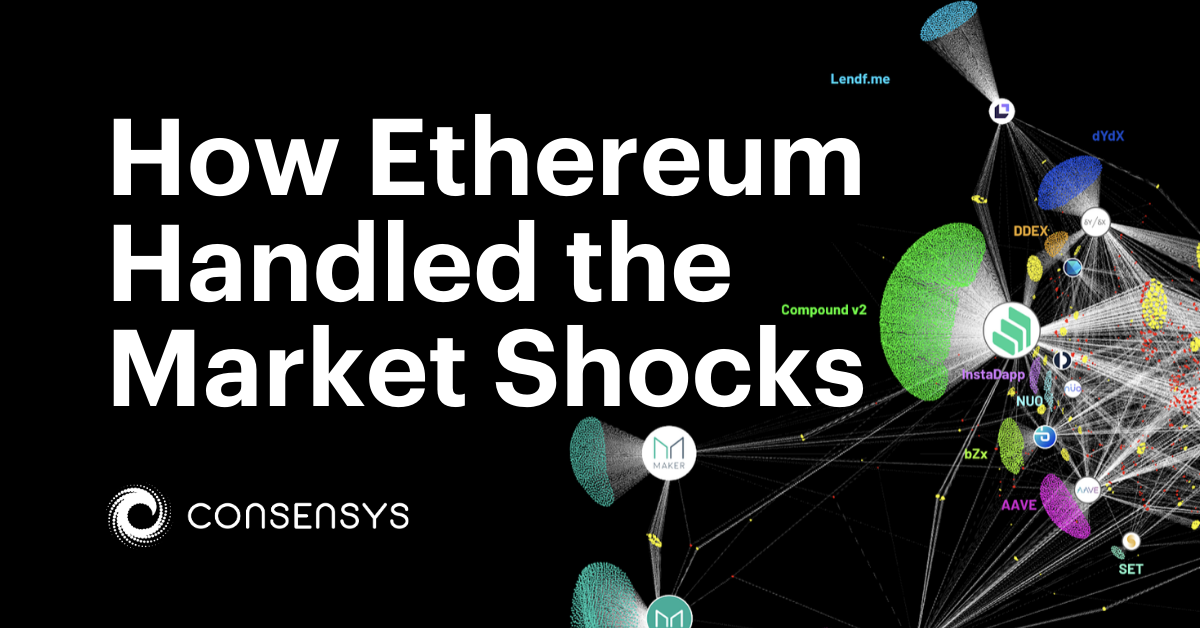 Over the past few weeks, decentralized finance protocols experienced what many are considering a once-in-a-crypto-lifetime test. This test continues—for both DeFi and traditional finance—as the world weathers and recovers from the COVID-19 pandemic.

On February 12, the Dow Jones, NASDAQ, and S&P 500 closed at record highs. A month later, stock market circuit breakers were triggered across the globe to curb panic selling, as US markets suffered the largest single-day percentage fall since the crash of 1987. March 12 was proof that traditional finance and decentralized finance are still quite correlated. As traditional markets contracted on Black Thursday, so did cryptomarkets, with ETH and BTC prices dropping over 40% in less than 24 hours.

In recent weeks, numerous app, platform, and exchange teams have shared analytics dashboards and described their efforts to ensure high-availability to users during these volatile times. In the spirit of transparency, we wanted to offer an analysis of how the Ethereum network performed at this unique moment in economic history and identify any takeaways for the future of digital networks and finance.

Hashrate refers to the speed at which Ethereum miners operate, specifically the number of hashes guessed per second for solving the nonce of a block of transactions. The hashrate on the Ethereum mainnet remained stable at ~170TH/s during the most volatile day, March 12. During the week of March 12-18, the daily average hashing power was ~165TH/s, nearly identical to March’s daily average level of ~167TH/s. Ethereum’s hashrate remained steady compared to other blockchains, such as Bitcoin, which experienced a 20% drop in mining hashrate. Overall, this means that the majority of miners stayed on the network during the price volatility.

On March 12 and 13, the daily average gas prices rose to 78 Gwei and 85 Gwei as users raced to cash out ETH or convert to stablecoins, increasing fees so that miners would prioritize their pending transactions. However, in the days following, the gas price returned to a daily average value of ~12 Gwei (another slight increase occurred on the 16th). The network capably handled the two-day surge of activity.

During the market drop on March 12, DEXs handled an astronomical amount of trading volume without any major issues, attacks, or outages. DEXs recorded 550k ETH traded—over a 5x increase from the day before—and 6,639 unique traders—nearly a 50% increase from the day prior. Across 17 active DEXes monitored on Alethio’s dex.watch, ~$70m USD was traded on March 12 alone, with Uniswap handling $42 million USD, nearly 6x the daily average trading volume in March. By March 17, daily volumes of ETH and the number of unique traders across DEXs returned to pre-crash levels. The panic was real, but short-lived.

By comparison, US stock exchanges halted trading four times in mid-March. Market circuit breakers were established in 1987 following the original Black Monday to allow updated and accurate information to flow into the market. The breakers were most recently updated in 2013 to prevent flash crashes driven by high-frequency trading. However, the trading curbs can have the unintended consequence of interfering with efficient pricing and exacerbating panic selling from traders who are trying to beat the tumble triggers. Another interesting data point: Robinhood, the commission-free trading platform, experienced technical outages at the beginning of March. The outages were unrelated to the market circuit breakers, but rather due to stress on Robinhood’s infrastructure.

However, more interesting than the overall number of DeFi users is the number of users who interacted with multiple DeFi protocols, since they offer a glimpse into network trends and interoperability across different platforms. Comparing user behavior between January, February, and March, it’s clear that during the market shocks of mid-March, users migrated from the long-game of lending and borrowing and clustered around DEXs like Uniswap and Kyber, moving into safe haven assets like stablecoins.

This increased user overlap in response to Black Thursday—the dense yellow cloud of users interacting with Uniswap and Kyber in the March graph above—captures the ease with which DeFi users can swap assets and move between exchanges. DeFi protocols like Kyber also aggregate on-chain liquidity sources such as Uniswap and other DEXs, allowing users to call on a single smart contract function for more efficient price discovery.

5. Stablecoins are in demand. Dai’s undercollateralization tested Maker’s commitment to full decentralization and the near-term viability of cryptocurrency-backed stablecoins.

Stablecoins are crypto assets that are pegged in value to fiat currencies or to a basket of assets to prevent volatility. Crypto-collateralized stablecoins like Dai require ether, the native token of the Ethereum network, to be held in smart contract escrow as collateral. The market cap of stablecoins continues to trend upward as crypto holders move to de-risk their assets while preserving liquidity. The chart below shows the day in each month of the quarter when the Uniswap DEX processed the greatest amount of volume. On March 13th, over 80% of Uniswap’s volume was in Dai and USDC alone.

The Dai stablecoin underwent a unique stress-test last month, as many have analyzed. On March 12, we observed a sharp drop in the DeFi scores of Dai pools, using Codefi’s Defi Score, which rates DeFi lending platforms based on factors including smart contract risk, collateralization, liquidity, and centralization risk. During the market shocks, users rushed to borrow Dai on platforms like Compound and dYdX in order to keep their CDPs from getting liquidated. As people borrowed Dai, individual pools saw higher utilization and less liquidity. Limited liquidity drives down a pool’s DeFi Score as there’s an increased risk to lenders being able to exit their position. The price drop in mid-March instantly liquidated Maker Vaults below the 150% collateralization ratio, leaving upwards of $4M worth of Dai undercollateralized and the stablecoin sitting above its $1.00 peg.

The network’s increased gas fees had consequences for the Maker protocol. The MCD-Medianizer, Maker’s on-chain price feed, got stuck in the transaction queue, stalling an accurate price update. This allowed some Vault owners to rescue their collateralized debt positions (CDPs) but also meant instant and complete liquidation for others once the price oracle updated. Moreover, several liquidators exploited the stalled price feed by front-running the debt auctions with increased transaction fees and winning ETH—over $8 million in total—with bids of 0 Dai.

These anomalies spurred conversation across the DeFi community about the need for circuit breakers, akin to traditional markets, and whether these were in fact anomalies, or if the system was working as designed. In the days after the market shocks, MakerDAO added the fiat-backed—and more centralized—USDC stablecoin as collateral on the platform and also recently auctioned off $5.3M of MKR tokens to cover the deficit and bring Dai closer to its $1 peg.

Dai’s instability through the price shocks has been a legitimate challenge for the DeFi ecosystem. Stablecoins still represent a significant improvement upon traditional payment rails, but fiat-backed stablecoins are at least more reliable in the near-term. The takeaway from Maker’s stress-test last month seems to be that DeFi protocols are indeed working as designed, but need to constantly optimize their monetary policy and price oracles to anticipate unique liquidity events.

6. Crypto assets are correlated to traditional assets, but data transparency makes all the difference.

The market shocks of last month very much proved that crypto and traditional assets are still connected, evidenced in the bump in the price correlation chart below between the S&P 500, BTC, and ETH.

For many investors, cryptocurrency is still an alternative investment in a wider portfolio, and not yet a fully adopted hedge against the unpredictability and lack of transparency in traditional markets. The constant improvements to user onboarding and to the macroeconomics of DeFi—with Dai as a perfect example—mean that the decoupling and “flippening” of traditional and decentralized finance is a much longer narrative.

If there is an overarching lesson from the market shocks last month, it is that data availability and transparency are critical to the success of decentralized finance and for that matter, global finance. The blockchain ecosystem emerged in 2008 as a direct response to the lack of transparency around toxic assets, zombie banks, and ratings laundering. Dai’s undercollateralization last month was a challenge for DeFi, but it was immediately visible and actionable for the community.

Rick Reider, Global Chief Investment Officer of Fixed Income at BlackRock, seems to have best captured the disorientation of global market participants: “If you don’t know where the safest asset in the world is, it becomes next to impossible to figure out where everything else is.” During these tumultuous times, the transparency of the Ethereum network helps with that search.