What Are the Risks of Central Banks Not Implementing a Retail Central Bank Digital Currency? 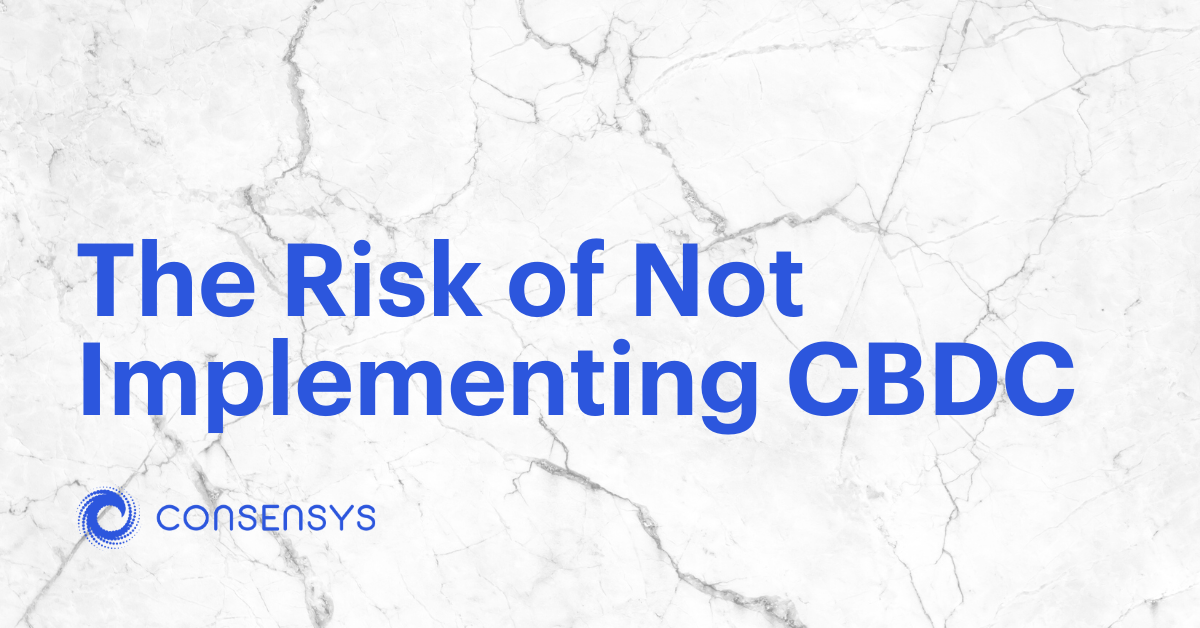 Several recent papers written by central banks and others like the Bank of International Settlement (BIS) state clearly that they fear the effect on commercial banks if they implement a retail Central Bank Digital Currency (CBDC). However, CBDC is a relatively risk-free alternative compared to the fragile global financial system we have today.

A major vulnerability today is that depositors could lose their deposits due to risks taken by commercial banks on their funds. Not all countries offer deposit insurance and therefore are not protecting their citizens. Citizens have no choice but to use a commercial bank for their financial needs. If the commercial bank goes into liquidation, the depositors do not get their funds back. These countries’ financial systems have exposed their citizens to this risk by relying on intermediaries and regulators to supervise the various commercial banks. This has time and time again proven to be flawed, which is why Satoshi Nakamoto’s Bitcoin White Paper resonated with so many when it was released in the wake of the 2008 financial crisis. Decentralized technology has presented a profound opportunity to reduce risk and build trust into our global financial system.

How Commercial Banks Can Participate in a CBDC Model

There are many ways to manage the risk that deposits in CBDC would become more popular than depositing with a commercial bank. For example, we have seen the Central Bank of the Bahamas (Project Sand Dollar), in which the use of the CBDC accounts is limited to a certain amount.

The other option is that there is no payment of interest by the central bank on these accounts.  The commercial banks can then offer higher levels of interest to the deposits that they receive which, in a free market economy, will attract deposits for a return even though the risks are higher than in a CBDC.

Central banks should also take the opportunity to innovate and level the playing field for their current customers, so commercial banks can compete head-on with the technology companies that have come into this space. To rely on regulation to prevent private coin issuers from operating is not the solution. This is a technology that is increasingly demanded by citizens and will be used by them depending on the best user experience that is offered to them. Big Tech will stop at nothing to ensure that they comply with legislation to offer this service.

The Rise and Risk of Private Digital Currencies

My concern is that central banks are so worried about protecting the commercial banks that they are not realising that the risk of inaction is greater than gradual innovation. The real risk is coming from the private companies that are in the process of issuing payment mechanisms that might entice depositors to never again have to use a legacy bank as we currently know them.

A move to a private digital currency or “stablecoins”—currency collateralised by fiat, cryptocurrencies, gold, or an algorithm or combination of financial instruments—could result in less use of fiat currency (currency issued by a central bank). Once this takes place, central banks will lose their ability to effect monetary policy and all their supply and distribution controls of the fiat currency will go out of the window.

We know of Libra, driven by Facebook, and of Apple Pay. We now hear that Google and Amazon want to come into this space and provide quasi-financial products. We know very well what happened in China with Alipay and WeChat and how people have slowly but surely stopped using cash. We also know that the Central Bank of China will soon release their version of a retail CBDC, allowing them to keep track of all transactions with unclear privacy protections.

We should be weary of the private coin issuers and how they will be managing transaction data. Do we realise that the private coin issuers will have to risk-manage the fluctuation in value of their collateralised positions? Do users of these coins realise that the issuers of these coins could suffer losses and that they might not be covered by traditional safety nets such as a deposit insurance or central banks as lenders of last resort? Will we once again rely on auditors and regulators to ensure that the collateral backing these private coins is in fact in place?

Many of these private coin issuers say they want to reach the 1.7 billion unbanked. Is this not the responsibility of central banks around the world? By partnering with fintechs and legacy banks that have gone digital, central banks can offer the financial access that global citizens need.

As we know, AML (Anti-Money Laundering) and KYC (Know Your Client) requirements make it imperative that transactions above a certain amount are disclosed to avoid the use of these funds for nefarious activities. Blockchain technology is now advanced enough that organizations can program transactions to remain confidential to certain parties in a network and still auditable for regulators. ConsenSys is currently developing a pilot that showcases how the privacy and permissioning levels can be programmed depending on the needs of the client.

In some countries where tax evasion is rampant, retail CBDC could encourage the citizens to disclose their transactions and pay taxes in real time. Programmable smart contracts on blockchain networks help automate disclosures and compliance in a way that was previously impossible.

In other countries, having a digital and immutable ledger that keeps a complete audit trail could allow users to keep track of their cash flows without having to wait for a bookkeeper to update the ledger or perform bank reconciliations. Remittances are also currently very expensive and prone to delay, which is why there are many fintech companies working in this space to resolve this pain point.

The central banks of the world should come together to define the standards of CBDC so that in the future, these digital currencies will interoperate and facilitate the transfer of funds from one country to the other on a real-time, seamless basis.

How Digital Payments Can Protect Citizens

In this time of pandemic, we should not have to ask people to stand in a line, without social distancing, to wait for their social grant or pension funds. If an economic crisis requires that the government financially support its citizens in the form of helicopter money (money deposited by the government into the citizens’ accounts), citizens should not have to wait for government-issued cheques to arrive in the post, which then have to be deposited in a bank account when the banks’ working hours permit. Blockchain technology enables these payments to be facilitated electronically in real time, directly into the e-wallet of the citizens. No more waiting or standing in line or walking to a bank or post office to be paid by the government. No one should ever have to visit a brick and mortar bank branch and wait to be served.

In many countries, the dependance on cash puts undue pressure on citizens who have no option but to risk carrying cash and being robbed. Not to mention a variety of other threats surrounding cash usage such as ATM bombings and hijackings. Some companies have to transfer cash from various depots to the retailer to protect their holdings. These threats should motivate central banks to go totally electronic and reduce citizens’ dependency on cash.

The technology is here to protect citizens in their money management. A highly programmable and interoperable blockchain like Ethereum can be adapted to the different needs of financial institutions and citizens in different nations, while still meeting global standards that ensure compatibility between different countries’ CBDC solutions.

Will Central Banks Have a Say About the Future of Money?

Central banks have an opportunity to keep pace with technological change and enable this evolution toward the future of money. With COVID-19 and the risk that bank notes could be infected, digital payment solutions are increasingly top of mind and what citizens want. Millennials and younger generations will only be attracted to digital solutions that are transparent, immutable, real time, low cost, under their control, available 24/7/365, and interoperable with other digital financial instruments like cryptocurrencies, security tokens, and utility tokens.

I challenge central banks to let go of their fear. When I think of central banks, commercial banks, and the system of fractional banking that we currently have in operation, I’m reminded of an old saying: “that what made you successful in the past will not bring you success in the future.” The time is now for central banks to embrace innovation so they have a say in the future of money. If the conservative nature of central banks prevents them from taking this leap forward, then let us work with the private coin issuers, properly regulated, who are ready and able to provide the functionality the world needs and wants.