Project i2i, Project Ubin, and Project Khokha are showing how nations and banks around the world are implementing blockchain solutions.
by ConsenSysDecember 9, 2019
Posted on December 9, 2019 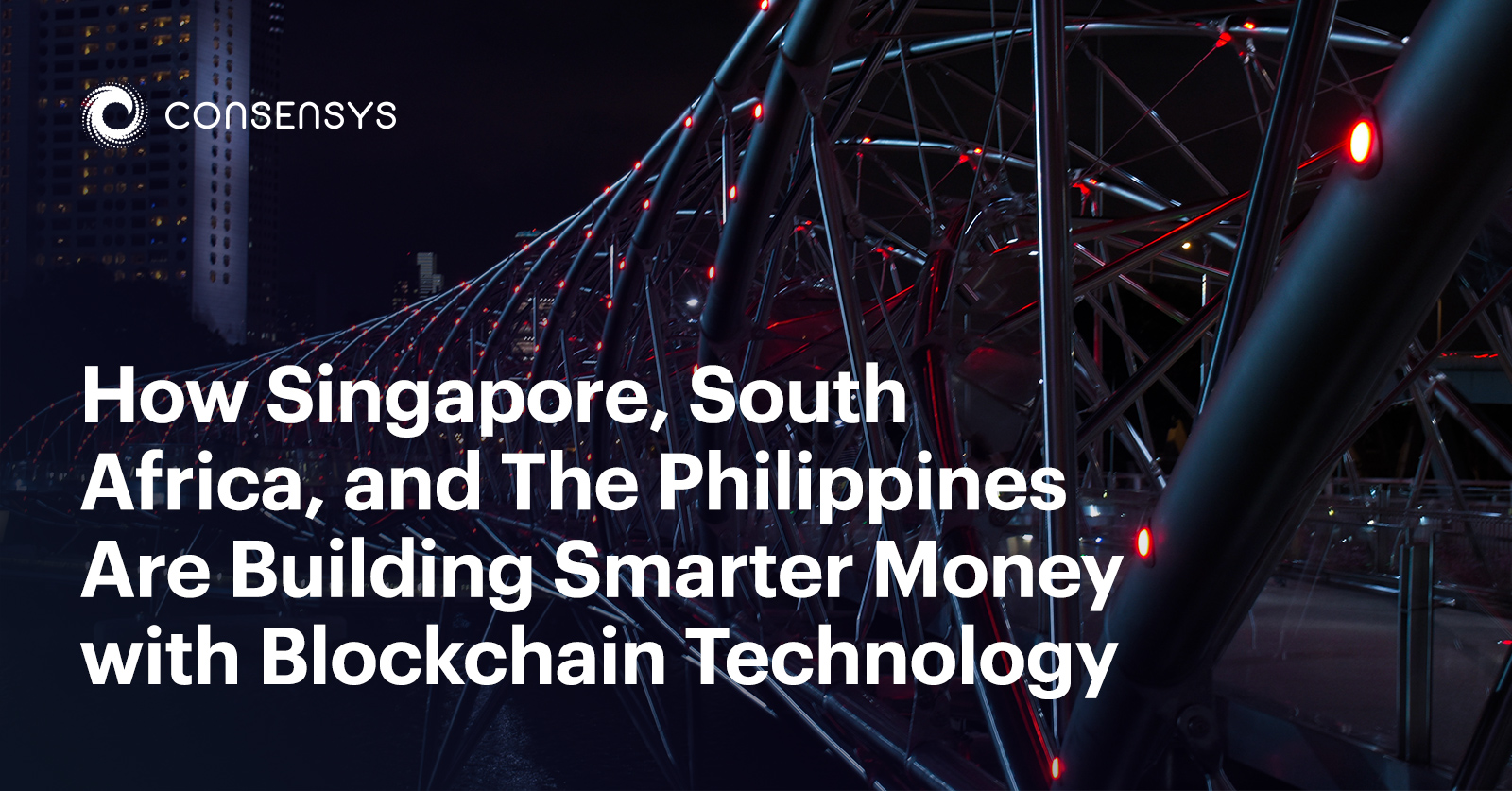 Payments between people, businesses, and banks are evolving at an unprecedented rate. We make contactless payments on a daily basis, transfer money to friends using an app on our phones and pay bills online. Most millennials have never used a paper cheque, and this rate it can be expected that the next generation will not use cash at all.

Governments all over the world are starting to recognise this with countries including Singapore and Hong Kong, laying out plans for a cashless society. For businesses and banks, transferring money digitally both domestically and across borders is the new norm. As we continue to evolve, the demand for a better system is rising, one that is efficient, secure and more compliant friendly. For the banking industry, the cost of providing the utmost reliability, availability, and resilience against attacks or equipment failure is high. Reconciliation of payments continue to be inefficient and the burden of reporting suspicious transactions falls on banks, making their overall operations costly.

Another area of improvement for existing financial systems is its efficiency when it comes to the time taken for settlement. It can take days to settle transfers and payments while incurring large overhead costs. For example, when you buy or sell financial products such as shares, the title or legal ownership of those financial products is exchanged for money. This exchange is called a settlement and in the case of the Australian Stock Exchange, this only occurs 2 days after a trade occurs. This process is referred to as ‘delivery versus payment’ (DvP). It is hard to believe that in 2019, it still takes days to settle a payment, while non-financial products and services are able to be delivered instantly.

These are just some of the factors that led to the creation of blockchain technology that birthed cryptocurrency like Bitcoin and Ethereum. A key part of blockchain that will revolutionise payments is tokenisation. While most people are beginning to understand the concept of cryptocurrency, tokenisation is still very new to many. In blockchain, a token is a digital representation of a unit of value. This unit of value can be assigned to the value of any digital asset or digital representation of real-world assets. In other words, it allows for a simple and efficient ownership verification and transfer system to be built. There are broadly two categories of tokens, security tokens and utility tokens.

Security tokens represent assets such as participation in real physical underlyings, companies, or earnings streams, or an entitlement to dividends or interest payments. This involves taking physical assets and placing their value on the blockchain by splitting up the overall total value into cryptographically secured digital tokens of representative value. A good example is tokenising a company, similar to what shares do today except it’s all done on the blockchain.

Utility tokens provide access to the goods and services that the project will launch in the future. They give holders a right to use the network and to vote. They are generally used to raise funding and build an internal economy within the system. Two good examples of utility tokens are Power Ledger and Grid+.

Power Ledger is an Australian blockchain-based platform that allows for decentralised trading of renewable energy. Power ledger recently announced a partnership with BSES Rajdhani Power Limited (BRPL), the largest electricity distribution company in Delhi, to trial a peer-to-peer solar trading scheme. During this trial, residents with rooftop solar panels can generate income by selling excess solar energy to neighbours. This could result in cheaper renewable energy for consumers in the region and income for those with home solar.

Grid+ lets customers cut out the markup charged by giving customers access to wholesale rates, made possible by using the Ethereum blockchain. In 2017, Grid+ created a limited supply of 300,000,000 GRID tokens. Each token may be redeemed for the right to purchase 500 kWh of electricity directly at the wholesale price with no markups. These tokens are freely circulating on the Ethereum platform and anyone can start purchasing and redeeming them.

Singaporean financial institutions are recognised for their efficiency. The nation state’s public policy is exported as a blueprint for other central systems around the world. The Monetary Authority of Singapore (MAS) has also taken a lead inn exploring the potentials of distributed ledger technology in regards to finance and banking applications.

By experimenting with technologies that aim to increase transparency and heighten efficiencies MAS signals that it is ready to future-proof its established processes. MAS has launched a multi-phase exercise in partnership with a consortium of international banks, distributed ledger technologies, and blockchain providers. By launching Project Ubin, MAS solidifies their rightful place at the forefront of banking innovation and industry leadership.

“DLT has shown potential in making financial transactions and processes more transparent, resilient, and at lower cost. The project aims to help MAS and the industry better understand the technology and the potential benefits it may bring through practical experimentation. This is with the eventual goal of developing simpler to use and more efficient alternatives to today’s systems based on digital central bank issued tokens.” – The Monetary Authority of Singapore

During the second phase, MAS partnered with ConsenSys Solutions and JP Morgan’s Quorum platform. Together, they successfully demonstrated how a tokenised Singaporean dollar could function as a means of daily inter-bank settlement. The aim was to improve how transactions are settled compared to the current system, where they are queued and periodically netted. The project determined that the platforms tested could serve as bases for distributed ledger-based RTGS systems. At the end of Phase 2, MAS provided open-source access to the code and supporting information from the exercise. The South African Reserve Bank (SARB) utilised this knowledge and shared codebase to build Project Khokha.

Having proved that blockchain technology works for interbank settlement, Project Ubin moved on to interconnecting blockchain networks. Phase 3 (Delivery-versus-Payment) was a project with SGX on developing capabilities for simultaneous exchange and final settlement of tokenised digital currencies and securities assets on different blockchain platforms. The ability to perform these activities simultaneously improves operational efficiency and reduces settlement risks.

Phase 4 (Payment-versus-Payment) looks at linking up blockchain payment networks for cross-border payments. Phase 4 started as a collaboration with Bank of Canada and Bank of England on a technology -agnostic review of existing payments models and new alternative models that could enhance cross-border payments and settlements. It then continued as a technical experiment to link up the experimental domestic payment networks of Ubin and Jasper by Bank of Canada, for cross-border payments. The project demonstrated the ability to connect the two networks and allow Payment-versus-Payment (PvP) settlement without the need for a trusted third party to act as an intermediary.

The project is now into its fifth phase – Phase V. This phase focuses on developing the multi-currency payments model, one of the alternative models described in Phase 4, for the purpose of industry testing with commercial applications. This phase takes a step beyond technical experimentation, exploring and understanding the broader ecosystem benefits of enabling business opportunities that were previously not possible or not cost-effective. The Phase V network will provide connectivity interfaces for other DLT networks to connect and integrate seamlessly, providing additional features to support use-cases such as DvP with exchanges, programmatic escrow, and conditional payments for Trade and Trade Finance.

SARB, in consortium with seven commercial banks, used Quorum, an enterprise-grade implementation of Ethereum, to create a blockchain-based interbank system that processed the typical daily volume of payments with full confidentiality and finality in record time.

SARB partnered with ConsenSys Solutions and Adhara to build a proof-of-concept grounded in real-world performance, confidentiality requirements, and diverse bank hardware on the blockchain. By harnessing a permissioned blockchain network, Project Khokha was able to replicate interbank clearing and settlements in less than two hours without a single point of failure.

“Transactions were processed within two seconds, across a network of geographically distributed nodes, with distributed consensus providing the requisite resilience. The SARB was able to view the detail of all the transactions to allow for regulatory oversight.” the SARB said.

Project Khohka was not the only project to benefit from the findings of Project Ubin. UnionBank in the Philippines and ConsenSys were looking into Project Ubin’s findings to include international funds transfer to their own platform, i2i.

Project i2i in the Philippines

The Philippines is a rapidly emerging economy with a population of over 100 million. However, two-thirds of the population remains unbanked. One-third of the Filipino population lives on less than $2 a day, while 56% of Filipinos residing in rural communities have limited access to financial services. 70 million Filipinos have severely limited access to both the domestic and global financial ecosystems. This poses a significant problem when up to 10% of the Philippines’ GDP is made up of international remittances sent from overseas workers to family members across the country.

UnionBank of the Philippines, one of the largest banking institutions in the country, sought to tackle this challenge by partnering with ConsenSys Solutions, Kaleido, Amazon AWS, ConsenSys Diligence, Microsoft Azure, and seven rural Philippine banks to create an inter-rural bank payment platform using Enterprise Ethereum.

Rural banks themselves were disconnected from electronic banking services and domestic money transfer networks, making it difficult for UnionBank to lay the groundwork for financial inclusion. To solve this, Project i2i implemented Enterprise Ethereum to create a decentralized, cost-efficient, real-time inter-rural bank payment platform that operates autonomously outside of existing payment infrastructures and intermediaries such as the Philippines’ PhilPass and SWIFT. The Project i2i platform works to connect rural banks as well as national commercial banks to the central bank, helping remote banks integrate with the domestic financial system, while also improving banking access for local citizens.

Unionbank took it one step further and in July 2019, successfully launched their PHX stablecoin. A stablecoin is a cryptocurrency pegged to another stable asset such as gold or a currency. Unionbank has successfully transferred a tokenised fiat using PHX from OCBC Bank in Singapore to an account in Cantilan Bank in Surigao del Sur, through the i2i blockchain platform. This further proved that tokenised payments can make cross border payments between banks simpler and more efficient, while remaining secure.

From the USA to the Philippines, banks all over the world are exploring the use of blockchain to replace or complement existing financial systems. Recently, Wells Fargo also announced they were developing a U.S. dollar-linked stablecoin dubbed Wells Fargo Digital Cash that will be used in a pilot initially for internal settlement across the company’s business. The benefits of using blockchain for interbank settlements include better efficiency due to less intermediaries, safety due to its speed, irrefutable entries and security keys and its lower costs.

In total, the International Data Corporation (IDC) estimates worldwide “blockchain spending” in 2019 will reach $2.7 billion with banking accounting for around 30 percent of projected blockchain spending until at least 2023. With this trend showing no signs of stopping and people changing the way they use and view money, banks and fintech companies cannot afford to not explore implementation of blockchain solutions.