Everything You Need to Know About Central Bank Digital Currencies 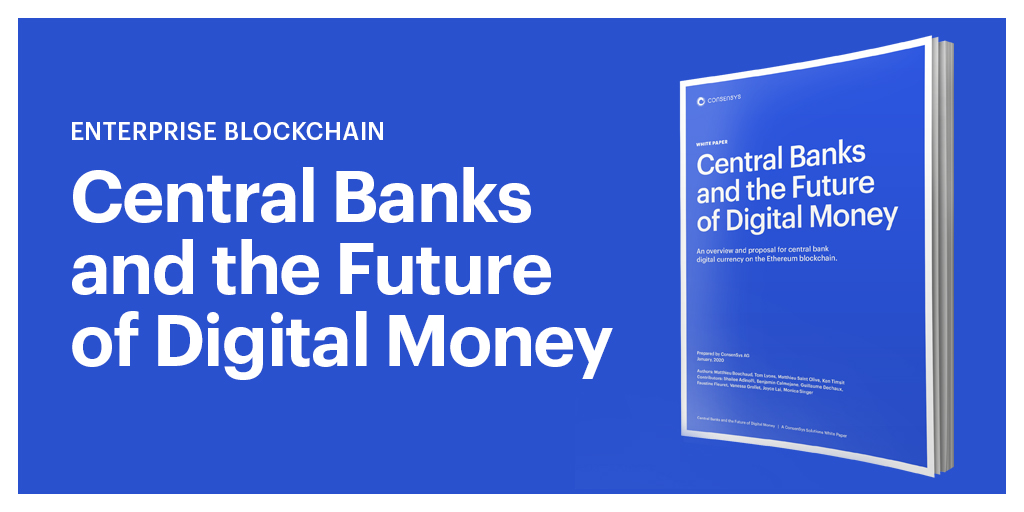 Stablecoins –– cryptocurrencies that retain a nominal value or are backed by fiat currencies –– have grown in popularity over the past several years hand in hand with the explosive growth of decentralized finance. Now, major financial institutions around the world including global banks are experimenting with digital currencies, and stablecoins are providing an ideal entry route in numerous instances.

At Davos in 2020, ConsenSys released a whitepaper that presents a practical proposal for central bank digital currencies on the Ethereum blockchain: “Central Banks and the Future of Money.”

The whitepaper also provides an overview of the history and the current state of central bank digital currencies as well as an example of how a CBDC could be designed and built on the Ethereum blockchain.

What are Central Bank Digital Currencies?

Central Bank Digital Currencies are digital assets that are accounted for using a single ledger (distributed or not) that acts as a single source of truth. Central bank digital currencies represent a claim against the central bank, similar to how banknotes function today. Finally, the currency is central bank controlled––meaning the supply of CBDC is fully controlled and determined by the central bank. A CBDC differs from a traditional cryptocurrency stablecoin where issuance isn’t controlled by a bank, but rather a group of individuals.

The whitepaper provides an overview of the potential and risks of CBDC, as well as an example of how a CBDC could be designed and built on the Ethereum blockchain. The intention is to give the reader not just a good background to this important topic, but also – by means of a concrete proposal – a practical look at what the implementation of a CBDC might entail.

Learn more about the types of central bank digital currencies in the whitepaper: “Central Banks and the Future of Money.”

The whitepaper also addresses other topics including:

Among the most significant innovations we are witnessing today are stablecoins, or privately issued cryptocurrencies pegged to a stable asset, which today have a market cap over $5B USD, as well as the parallel phenomenon of central bank-issued digital currencies, commonly referred to as CBDC, that are the subject of this paper. According to the Bank of International Settlements, over 70% of central banks are looking at issuing a digital currency on a blockchain. We think this is a development to be applauded.

As we sit on the precipice of a financial and technological revolution, major financial institutions are poised to benefit from improved financial services and internal operations that reduce costs and improve efficiencies. A world in which CBDC’s are prominent will improve global monetary policy by providing new tools for controlling the money supply and regulatory compliance. Individuals will benefit from cheaper remittances across borders and real-time settlement for specific counterparties. However, the true value creation will spawn from more connected global systems that will increase cross-border innovation and collaboration.