Blockchain in Europe: Learnings From the EU Blockchain Observatory and Forum

For two years, ConsenSys has led the team behind the European Commission’s main blockchain think tank and policy advisory body. Here are our takeaways about the state of the ecosystem.
by Tom LyonsJune 25, 2020
Posted on June 25, 2020 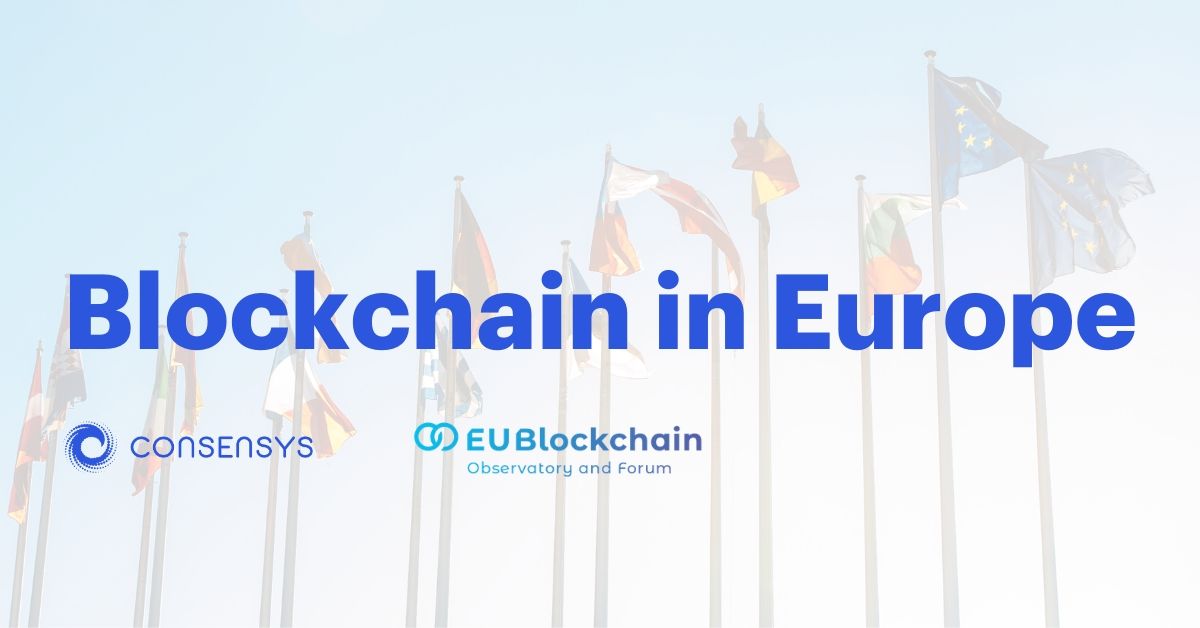 In May, ConsenSys successfully concluded its 27-month mandate from the European Commission to run the EU Blockchain Observatory and Forum. The purpose of the Observatory has been to facilitate a dialogue between European policy makers and Europe’s blockchain thought leaders and community. In this post, we summarise the Observatory’s work and findings. For more details, you can consult our 94-page final report, which presents the Observatory in detail, or the Observatory’s website (www.eublockchainforum.eu).

How the EU Observatory Began

The roots of the Observatory go back to July 2017 when the European Commission released a call for tender to build a “European expertise hub on blockchain and distributed ledger technologies.” At the time, a number of policy makers in the EC as well as Members of the European Parliament—including Jacob von Weizsäker and Eva Kaili, who were early and remain steadfast champions of the Observatory—had recognised blockchain as an important breakthrough. But that was also the height of the ICO bubble and public debate about cryptocurrencies and money laundering, so there was plenty of skepticism in government circles and the general public, too. Many stakeholders did not know about the broad range of use cases of blockchain technology in the government, enterprise, and start-up worlds.

When we submitted our bid for the project, we saw it as a way to support a new narrative for blockchain and an opportunity to focus on the value of decentralised trust. This has been the view of our European Commission partners as well. For the EC, meeting the goal of ensuring Europe takes a leading role in blockchain requires policy makers to have a deep understanding of the technology and the needs of the ecosystem.

We have tried to run the Observatory along those lines—looking to be both a “watchtower”, analysing the development of blockchain in Europe and globally, and a “lighthouse”, providing guidance to policy makers based on the collective expertise and insights of the ecosystem.

How the Observatory Worked

This mission has been reflected in our work, which has been heavily focused on analysis and thought leadership around blockchain use cases. All told, we held 18 workshops on blockchain-related themes, commissioned and published nine academic papers on technical blockchain topics from our academic partners, and researched and wrote 13 thematic reports—original white papers on blockchain subjects meant to educate and provide policy recommendations. We also built out the Observatory Website, including a crowdsourced blockchain map which now contains a listing of over 700 blockchain initiatives in Europe and globally, and an Online Community.

To do this work, the Observatory relied on a wide array of stakeholders. There were the aforementioned academic partners, which included the University of Southampton, the Knowledge Media Institute at the Open University, University College London, and the Lucerne University of Applied Sciences. We also formed two 30-person working groups comprised of European blockchain thought leaders, and relied heavily on input from our workshop participants—the experts, entrepreneurs, and academics who spoke or took part in panels, as well as the many audience participants who engaged in debates and conversations during our working sessions.

Our main focus has been on use cases, from transversal themes like identity, legal and regulatory frameworks or governance, to more sector-specific ones like supply chain, healthcare, or financial services. While that made for a fairly broad selection of topics, looking back today we can identify a number of key themes that remain particularly relevant to blockchain in Europe.

Digital assets have been a main concern of the Observatory since the beginning as policy makers and the community work to understand this new asset class. Much progress has been made. In the Observatory paper on digital assets, we note that almost all jurisdictions have now published an opinion on the subject. And while there is still no standard classification, rough consensus on many aspects seems to be forming.

We have seen tremendous interest and growth in the area of stablecoins and—catalysed to a great degree by Facebook’s proposed Libra project—a remarkable amount of rapid movement in the area of central bank digital currencies (CBDCs). We think CBDCs in particular may be one of the most vibrant areas of blockchain in the long term.

Blockchain technology is well-suited to track and trace use cases, and so it is no surprise that both supply chain and trade finance have proven fertile ground. This was a topic for one of our more popular papers. With major projects and consortia in areas like food, pharmaceuticals, energy, luxury goods, and commodities trade finance already delivering services and creating value—and in some cases introducing innovative new business models—we expect a great deal of activity and innovation in this sphere as well.

Of all the transversal themes in blockchain, identity may be the most important. Not only does identity play an essential role in most blockchain use cases, as we pointed in our paper published back in May 2019, digital identity today is all but broken. Blockchain can be a tool to help fix it.

The good news is that awareness of decentralised identity concepts generally and self-sovereign identity (SSI) is growing. This is true in the community, where we have seen great progress on decentralised identity standards, as well as in policy circles. That the EC has made SSI a core part of EBSI, the European Blockchain Services Infrastructure, and has otherwise committed to supporting SSI principles is in our opinion a significant development.

The State of Blockchain in Europe Today

In addition to exploring blockchain themes and use cases, we have also studied the state of the European blockchain ecosystem. This was a main topic in our Conclusion Workshop, where we tried to provide a retrospective of our work. Among the highlights:

Blockchain policy in Europe has advanced markedly since the Observatory began. This includes the formation of the European Blockchain Services Infrastructure (EBSI), an initiative to build a blockchain infrastructure for cross-border government services, and the International Association of Trusted Blockchain Applications (INATBA), a public/private partnership designed to bring the Member States of Europe together with the private sector as well as other stakeholders like academia to further the blockchain ecosystem in Europe.

The European Union has also been promoting and enabling blockchain as part of the Digital Single Market legal framework, and is looking at the Digital Services Act to see if there is anything that can be done to support the mutual recognition of smart contracts. Policy-wise, European Commission is about to publish its first dedicated Blockchain Strategy, outlining its vision on how to take blockchain further under the next budget, and also addresses decentralising technologies as part of the overall EU Data Strategy.

The Ecosystem Has Matured

When we started in early 2018, there were hardly any large enterprise blockchain projects or platforms in production. Hyperledger had recently launched within the Linux Foundation and the EEA had gathered over 150 enterprise member organizations to map and develop the Ethereum ecosystem. Today there are hundreds, either live or about to go into production. In an analysis we found a significant rise in the number of companies joining blockchain consortia in Europe, which we interpreted as a sign of mature, enterprise-focused implementations.

When it comes to startups, the clarity in value propositions and user experience of wallet providers, decentralized finance operators, and other tools built on top of popular protocols have improved by an order of magnitude. We also think it fair to say that the political and regulatory narrative about the role of blockchain technology in our society has changed dramatically, from one of skepticism to one of mainstream acceptance, excitement, and commitment from sovereignties regarding the potential of blockchain innovation.

We Are Still Missing the Full Coherent Framework

Despite all this progress, there is still a way to go before we achieve a coherent overall framework for how blockchain technology will be used in Europe. Some hoped in two years the community and government could come together and find an overall solution to the most intellectually challenging questions raised by blockchain technology—including the legal standing of decentralised governance structures, the legal validity of smart contracts or the development of interoperable standards.

Although there have been interesting frameworks, interpretations and proposals, many of which we discussed during the Observatory’s work, there is still a great deal of work to do to ultimately connect legacy infrastructure with new decentralized systems. This is par for the course when it comes to innovation.

Need to Focus on the Big Picture

Setting aside the specifics of blockchain technology, the key success factors for the emergence of global innovation champions are well-known. They include access to a large, homogeneous single market; co-investment schemes between government agencies and private investors to mitigate investment risks and enable the scale-up of commercial products; incentives to hire and the removal of disproportionate market inefficiencies such as regulations that create natural oligopolies or lack of access to the financial system. We look forward to the development of virtuous circles between governments and technology companies.

Looking Ahead: The Ecosystem Will Continue to Mature

Where does this ecosystem go next? Over the near term, the ecosystem should continue to consolidate and mature. We expect more and larger consortia, among other things, to both be formed and go live. We are particularly excited about European government adoption of blockchain, for example through EBSI, because we think that will both help policy makers better understand the technology, but also catalyse broader adoption as citizens use these blockchain-supported government services. Similarly, we also expect increasing clarity and harmonisation on the legal and regulatory framework side. This too will be a great help for the blockchain community and industry in Europe.

For those who want to keep up with blockchain in Europe, there is good news: the Observatory will continue for at least another 30 months under the aegis of a new consortium. For us, the renewal of the Observatory by the EC has been a great validation of its work. More than that, it reflects the continued importance of this technology in the European context, and the important role that the EU and Member States are playing in helping it reach its potential.

Consult our experts to find out how blockchain can transform your organization.
Contact Us
Asset ManagementCapital MarketsCBDCPayments
Newsletter
Exclusive Content