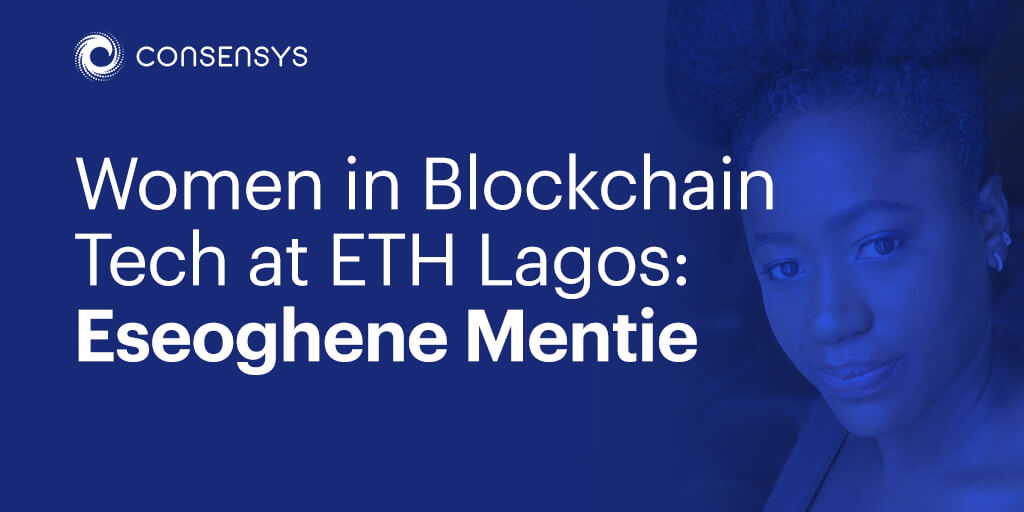 Living in Lagos, Nigeria, Ese shares how she became interested in blockchain technology and unveils a hidden connection between decentralization and ancient African structures. Ese thinks it’s high time that people understand that technology is not only within reach, but can be wielded by anyone who wants to learn. This is her story.

Over the centuries, foreigners have imposed their systems onto Africa, and we were coerced into using them — often to our detriment.

My mom introduced me to crypto.

We always had computers around, and I had an ongoing desire to learn how things work. That fascination led to a Bachelor’s degree in Computer Science from Benson Idahosa University, Edo State Nigeria.

Interestingly enough, my mom brought crypto onto my radar! She introduced me to the term “Bitcoin.” As “the tech person” in my family, I went off to research. After giving her a thumbs up to buy crypto, I kept exploring blockchain and cryptocurrency. I was amazed by how there was no need for a central server, how it was distributed, and that it was open source.

At present, there is a continuing struggle around borders, visas, trust, and identity around the world. If there is a way to solve this ongoing issue, it will be through technology. The combination of these two topics led me to the uPort project, a blockchain company that focuses on self-sovereign identity on the Ethereum protocol. On the uPort platform, you own the rights to the data that makes up your identity, and you can share and revoke access to that data at will. Rethinking identification structures could have many positive implications for the African continent, as an estimated 500 million people have no official identification.

I joined uPort as the Quality Assurance Manager in 2017, and I became Director of QA in early 2019. My job is to tie risks to issues and bugs to reduce risk levels.

We are currently working on ways to make it easier for people to integrate uPort and be able to access their data even without the latest technology. The goal is to make it accessible to people who have feature phones — a type of mobile phone that has more features than a standard cellphone but is not equivalent to a smartphone — or for people without a phone.

Once I joined the blockchain space, I began to discover even more similarities between these “new” technologies and timeworn and trusted mechanisms in African communities.

The construction of Web3 mirrors traditional concepts and societal structures of how we self-governed in Africa before colonialism. In previous times, Africa was made up of decentralized tribes, clans, and communities, not centralized nations. Borders and countries did not exist. Greed and colonialism created all of those things.

For example, in some African communities, when a person wants to get married, they go to their partner’s village and carry out a background check. They could speak to an Oracle, an old woman from the village, that tells the history of each family and their compound. In blockchain protocols, oracles are services that are used to gain extra external information on a system to validate data.

Even though blockchain may be a new technology, it taps into ancient concepts and traditions of equitable relationships and decentralized power structures. Self sovereign identity mirrors how Africans have traditionally identified themselves, carried out the KYC process, etc.

Over the years, people have always brought their systems to Africa, and we forced ourselves to use them — to our detriment. On the other hand, Web3 is constructed as an open technology. We can use, we can develop it. We can use this technology to create societies and systems that will work. Systems that will benefit the diverse tribes and communities in Africa. This is why I jumped on.

uPort has team members from every continent: South America, Africa, India, Europe, and North America. Everyone is represented, and our code reflects that. It brings a holistic perspective to how the product should look or function in different places. Diversity creates a better product.

Having people from different parts of the world is an eye-opener for everyone involved. Once a month, we hop on a video call and chat and eat together. Not only is it a bonding moment, but it also works to help people change their embedded perspectives.

For instance, we have an Indian colleague who shares pictures of the most beautiful places that challenge the typical images of India on TV. We have colleagues from San Francisco who report that many locals skip taking the train because there is no WiFi. I tell them about the traffic congestion in Lagos, and how much people would enjoy a train — even if it didn’t have WiFi.

Our uPort team members share how their local systems work, and this offers us first hand insight into another part of the world and the people that live there.

I want people to understand that blockchain has very relatable origins. Don’t think it’s too complex, or that it was only made for certain people. Relate the components to things that are around you, and you’ll soon realize that it isn’t impossible to understand.

Also, more people in tech should explain that tech, in and of itself, is not rocket science. When I speak at Girls Who Code, I break things down into understandable concepts, showing the girls that it is possible to learn anything. Relatable role models are crucial to inviting diverse developers to the table.

My interpretation of diversity is a little bit different, as I grew up on the African continent. Yet, I could go for a meeting right now in Lagos as the manager with a team member that happens to be white. The other party will automatically assume that the white person is the boss. It never fails.

A few conference attendees in the US could not believe that a girl that looks like me, with long braids, could possibly be working on the uPort project. Lastly, during a meetup in Ethiopia, a participant asked me: “Is this technology for everybody? It’s not just white people working on it, right?”

In short, we have to show the next generation that tech is not just for westerners. You don’t have to look a certain way to work in tech. We have to encourage everyone to contribute and put their needs into code.

Blockchain and crypto must have a clear distinction

Africans need to understand the difference between blockchain technology and cryptocurrency, and the power that the technology could help put into our hands and help us achieve. About the ecosystem, I wish more people knew that it is still very exclusive and homogenous.

We need to do more work to be inclusive to all kinds of people. We must all contribute to this technology— one that we are all going to use. If diverse architects don’t contribute, the tech will only work towards the needs of a few particular people instead of the needs of everyone.

Here are my tools and tips for Web3 developers:

Tools — Truffle: Blockchain Dev Tools is an excellent product that will get you started immediately. Your other best friend is Medium. Read Medium articles about how to get started with Ethereum. Create an account on MetaMask to understand what it means to have an Ethereum account. ZeppelinOSis a great framework to get started quickly.

What’s the biggest lesson you’ve learned in your role?

Maintaining quality is a never-ending journey.

You have to call out the bullshit to keep the quality high. This could single you out as the person in the room that people don’t initially like. However, once they realize that you are working towards everyone’s benefit, they start to like you. Never be afraid to be that person.

Being a female in tech, I’ve had to deal with bad egos. Some software engineers have really large egos. I’ve learned how to take no prisoners and tell it exactly how it is. I’m flexible! But I take no prisoners. I don’t care about your ego. Let’s get the job done.

I’m a person that believes that “we will fight now, but we will be friends later.”

She says, with 13 recommendations on LinkedIn.

Want to learn the skills to become a blockchain developer?