Emma Channing shares her story from a text-based MMPORG gamer obsessed with in-game economies to advising on STOs and capital markets at ConsenSys
by ConsenSysNovember 19, 2019
Posted on November 19, 2019 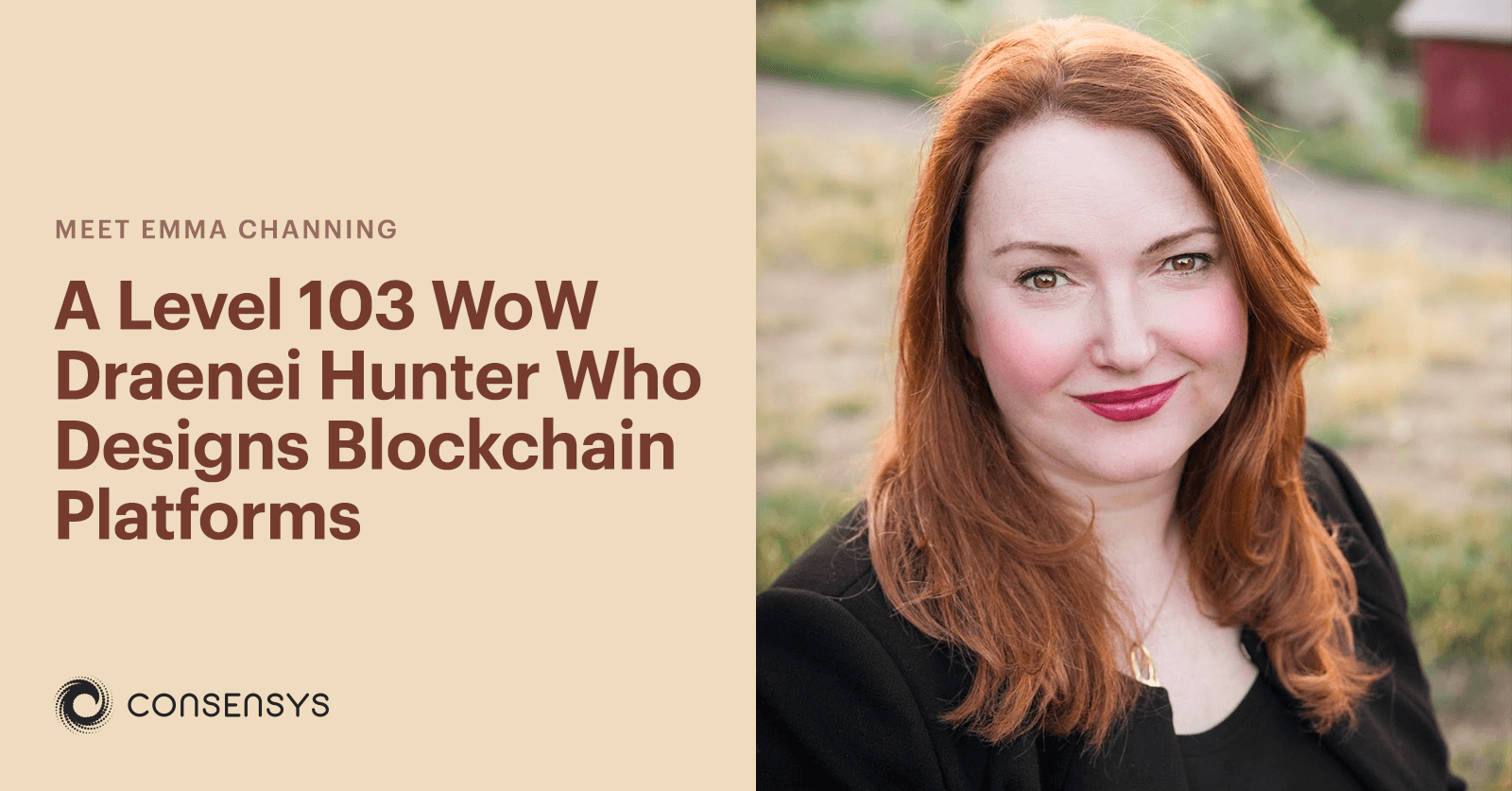 Within ConsenSys, Emma works as a FINRA registered representative at ConsenSys Digital Securities LLC, she contributes to the Codefi STO issuance platform architecture design and testifies before the Wyoming Blockchain Task Force–the leader of blockchain legislation progression in the United States. Emma shares with us her story from gamer to blockchain law advisor.

How did blockchain and Ethereum pop on your radar?

My childhood and teenage years involved endless hours designing and playing games. MMORPGs from early days, transaction-based games like Elite, coding in forgotten languages like BBC Micro. I graduated to the text-based games like ZombieMud, before moving onto WoW and Diablo III. I inevitably became a customer of Internet Gaming Entertainment for WoW gold only.

I have predominantly always played a Druid, but I have found it tough to find good raiding guilds on the US servers in the last 10 years or so, and so now my highest level character is a Hunter as I tend to solo (still bow or staff though). That being said, time to play in the last two years has been hard to find!

Thanks to blockchain technology, those two parts of my life were really about to collide.

It was Spring 2016, and I was working as SVP of Legal & Regulatory at Imaging Advantage when a friend sent me a link to CoinMarketCap. While I had heard chatter about WoW gold-like things emerging, I certainly wasn’t aware of the scale. I fell down the rabbit hole reading about projects that were launching at the time, including SingularDTV.  I was utterly astonished at the power of Ethereum’s application layer and the rapidly emerging ERC20 dominated market. I submerged myself in the 1,800+ items on CoinMarketCap at the time, joined Telegram chats, and read numerous white papers.

Above all, it was an uncanny match between these two halves of my life.

By Fall 2016, I joined the blockchain community, working as general counsel of Argon. I was involved in the first three security token offerings, which were BCAP, Science Blockchain, and Protos. This was a good 12 months before anyone else jumped in the space, and we all know that blockchain has its own sense of time. Being early, a pioneer, especially in blockchain, is a long, hard, and rewarding path. The people I met along the way are the most extraordinary gift, and I can’t imagine doing anything else.

What interested you the most regarding game theory, token economics, and blockchain technology?

A lot of what ConsenSys does on this front is way over my head but astonishing in its scope. Token curated registries (TCR) are the current beating heart of the technical and economic design of decentralized token networks. ConsenSys leads the world as far as TCR technology goes.

FOAM is the first-ever mapping system in the world to utilize blockchain and TCR technology and is estimated to be three times more accurate than civil GPS. Adchain and TCR Party were the next two utilizations of TCR and again both ConsenSys projects.

Ultimately, something that has intrinsic value because people decide it has value, and they also must spend it to carry out tasks (WoW gold, gas, etc.) has always been a fascinating piece of finance and game theory to me. The digital item economy continues to roll out that theory in daily practice.

What opportunities and challenges are you working on at ConsenSys?

I work on four primary areas within ConsenSys; I work as a FINRA registered representative at ConsenSys Digital Securities LLC. I am a contributor to the Codefi STO issuance platform architecture design. I coordinate a lot of ConsenSys’s efforts this year in Wyoming and Colorado. This predominantly involves testifying before the Wyoming Blockchain Task Force (WBTF) and a big topic this year has been digital identity. I sit on several think tanks that deal with a broad range of blockchain-related issues and speak on panels from time to time.

The WBTF has been a pretty significant commitment for me this year, but one that’s very rewarding. The WBTF’s work and resulting legislation leads the US and indeed the Western World on how to be thoughtful, careful but enabling of blockchain technology. The WBTF sits 3 times through the summer – and I have testified pretty extensively at every session, including being invited to demo uPort and answering a lot of questions from the WBTF on digital identity, its use, implementation and various providers. The key pieces of legislations out of these sessions have just gone before two Select Committees, Corporations and Judiciary and were ultimately approved and move on to Wyoming’ 40 days maximum legislative session. That duration is important because the Select Committees and the WBTF are made up of Representatives and Senators who ultimately will debate and hopefully pass the bills.

I just testified on November 18, substantively on two key bills before the Corporations Committee – 20LSO-0056 v0.7 Select committee on blockchain, technology and innovation (which keeps the WBTF from being disbanded and instead turns it into a Select Committee) and 20LSO-0059 v0.4 Municipal bonds-digital securities which while not being absolutely necessary brings very important clarity to a type of STO that we think will be very important. I provided comments on the other two and the Bills all passed the Corporations Committee (albeit not unanimously). There was a full session of 4 hours of debate and testimony and it was certainly a healthy discussion which dove into details both technical and legal. I was however the only person testifying from an industry perspective, rather than Wyoming officials, which really makes me think how important it is to continue all the ConsenSys efforts in Wyoming.

Who are your heroes and influences?

Wow, we could be here for some time. This is a tough list to put together. If I could, I would list about 50 people here. I’ll try to keep it short.

What blows me away about this industry is how small it is. Many of my blockchain heroes are often people I know and work with. But in the interests of brevity, my real heroes are people who are out there building stuff, and that list starts with Joseph Lubin and the women of Collective Future. Blockchain simply wouldn’t be where it is without a legion of dedicated lawyers and regulators working very hard due to the vast nexus of legal issues it causes, such as Matt Corva and again the women of Collective Future.

I think mentoring and teaching is a huge part of professional life, and I have learned as much from colleagues and friends as more traditional senior mentors. In particular, a lot of my Stanford friends taught me amazing things and have gone on to do extraordinary things way too numerous to list. Still, Alexandra Ressler deserves an honorable hero mention as a BSE and JD/MBA who became an incredible data scientist. Alexandra is an extraordinary mentor and teacher. Her Facebook data analytics classes are the stuff of legen d, and they manage to incorporate the End of Ze World amongst many great stories using data.

Professor Jonathan Bendor taught my favorite Stanford class Negotiation & Conflict Management, which touched on game theory and role-play negotiations. It got me out of a lot of bad habits and taught me better and new ones, mainly that aggression is pretty much the losing hand in a negotiation, and knowing the data inside out really the only sure-fire way to win.

Which projects are you excited about in the Mesh?

ALL the things! It’s tough to select exciting projects in the Mesh because there is so much. I’m still running across new and amazing things eight months after joining ConsenSys. It’s really the collective force of the Mesh that is the most exciting thing but also the most convincing to potential users and clients.

Nonetheless – to me, especially when I am explaining technology to people not deep in the blockchain ecosystem, simple but powerful technology that’s functioning with a limited number of clicks, and no need to understand blockchain, for a user to use or see used a blockchain product that can be life changing.  This is especially true when I am trying to explain blockchain technology on panels and think tanks – many non-ConsenSys projects don’t even have a publicly available demo so it’s amazing to present something that is live code that people can go away and explore in their own time.

Three projects that fit that description are uPort’s uPortlandia, Treum’s From Bait to Plate video and Gitcoin’s Cowboy Coin straight out of the gate when I am speaking to people who are new to blockchain or interested in implementing the technology. These projects touch on essential topics that can be made so much better with Web3. These projects are also accessible, with minimal clicks to point to and show people the full picture.

If you could bounty any issue, what would it be?

What do you wish more people knew about Ethereum and the ecosystem?

What’s the biggest lesson you’ve learned in your role?

There’s always going to be something astonishing around the corner in this industry.

Want to learn the skills to become a blockchain developer?